Tulsa Flashback: McDonald’s, Happy Meals, and the Playground of Pain 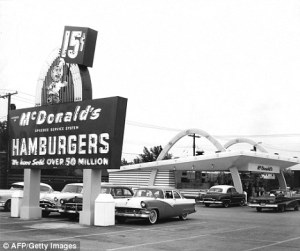 McDonald’s was the pivotal food-purveyance establishment where all the young uns developed life-long addictions to fried, processed, protein-void food that would ensure we would grow up to line the pockets of the healthcare industry. (We didn’t know squat about “healthy eating” back then. When you were hungry, you ate what you could get your hands on, and that was the end of any critical analysis whatsoever. Screw label-reading. And pass the salt. Because at McDonald’s they salted everything, even the air, and we walked out of there with the burning tongues to prove it.)

Of course, nearly every town of a respectable size had a McDonald’s at one point or another, so this experience is not unique to Tulsa. Nor was it unique to Broken Arrow, where my family moved just before I started the second grade, in 1972. (Yes, ladies and gentleman, as a young lad I was ripped away from the exotic, bustling metropolis of Tulsa and forced to dwell in a house on a gravel road in the middle of nowhere. The only positive side to this rude adjustment was that the gravel road meant I had an ample supply of rocks to throw at someone, should the need arise. And it did.)

If your McDonald’s location happened to be one of the fancy new ones, then there would be an enticing playground constructed in front of the store. (If your parents dragged you to one of the older-school locations, where they just had minimalist picnic tables and no slide, then your parents clearly didn’t love you as much as good parents should.) The playgrounds served a two-fold purpose. One, it allowed the children, who already had more metabolism than they knew what to do with, to run violently amuck for hours on end, further increasing their appetite and thusly increasing sales within the store. This is Product-Movement 101.

I should point out that these original playgrounds (not the child-proofed versions that came later, when over-protective people sanitized the equipment into blandness in order to avoid lawsuits) were rife with danger. You could break a bone quicker than a parent could say “don’t do that”. Still, we weren’t over-coddled back then, and we had resiliency. If you chose to do something dumbass, like leap off the top of the Mayor McCheese jungle gym without bothering to see what was below you, and subsequently sliced your leg open on Captain Crook’s sword, you sucked it up and kept going. (You might have to use some napkins to soak up the blood, as napkins were plentiful back then and you didn’t have to beg for them at the counter or pay a surcharge, but you did what you had to do. And then your raced off to throw your sister at a pack of those creepy round jaw-breaker characters that later had starring roles in the Pacman games.)

Second, whilst the urchins were destroying civilization and screaming as much as possible, the parents had a few minutes to collect their thoughts, strategize about the strenuous task of placing an order for the entire family, and wonder why they had ever thought it was a good idea to even have that family. I’m sure the drive to McDonald’s with a pack of energized offspring could cause the parents to become reflective and despondent, what with the hyperactive kids bouncing off the doors and ceiling with the intensity of those little plastic balls in the hopper during Bingo Night at Our Lady of St. Margarita’s.

Eventually, everyone had to go inside and mill around in the ordering area. This was another moment fraught with tension and suspense. The parents had to deal with ensuring that they got enough food for the unruly tribe without having to skip a car payment. The children were invested in wondering which free prize they might get with their Happy Meal. This was always a critical moment, because if you opened the box and found a repeat of something you already had, you would have to live with the shame and disappointment until the next time you could convince your parents to go back to the Land of Deadly Playgrounds and Over-Abundant Salt Licks. It was even more annoying when one of your siblings got the very treasure you desired, because you knew they were going lord it over you for the rest of the weekend, to the point of you seriously contemplating sibling-cide.

Actually, the better prizes were bestowed upon the kiddies before the Happy Meal was created by the Marketing Team, which happened in 1979. (I looked it up on the Internet; it’s not like I scribbled such a development in my diary.) Before someone decided that we needed happiness in a box, the prizes were more centered around something the child might actually want. It was not until later that the prizes were tucked into a flimsy cardboard container, and the prizes became increasingly worthless as they morphed into publicity tools for the latest movie blockbuster.

The best of those pre-Happy Meal treasures, in my nerdy little opinion, were those plastic watches that weren’t really watches. Instead, the place where you could normally determine the time, if the damn thing had any actual value, would open up, revealing a nifty storage facility. It didn’t hold much (because kids are meant to have limited ownership of the important things in life, that’s how you keep them under control) but it could hold four or five quarters. And that was about the amount you needed in those days to pay your own way at a fast food joint, with change left over, and this was an excellent bargaining tool to use when trying to convince your still-rattled parents that it was time for another trek to McDonald’s.

Me: “Can we go to McDonald’s? I don’t have the green watch yet.”

Mom, with that hairdo that meant she had experienced an especially trying day at work, and if I had any sense whatsoever I would leave her alone: “Can I set my purse down first? Maybe go to the bathroom? And we just went to McDonald’s last Friday.”

Me: “But that was days ago. Decades. We need to go today so I can complete my collection.”

Mom, briefly pausing to stop one of my siblings from doing something incredibly stupid with an electrical outlet, whilst I did nothing to prevent the possible carnage because I already had too many siblings and would relish a reduction in the family voting bloc: “Collection? What are you talking about? Is this something for school?”

Me, shuddering at the thought of the immense density of parents: “My watch collection from McDonald’s. I want them all and I don’t have the green one.”

Mom, having finally rescued one of her offspring from the evils of alternating current that coursed through our doomed household, and fully focusing on me: “You do realize that those are not real watches. Why do you need them?”

Mom, going for the tough-love angle, because who really had time for this: “I wasn’t aware that you had friends. And I don’t have the money.  I just had to pay for that thing your sister did.”

Me, grimacing at the thought that one of my sisters had once again done something insipid that quashed my dreams and life goals, but also realizing that I needed a better bargaining stance: “I can pay for my own meal. Look, I have the quarters.” I began pawing at the yellow fake-watch on my arm, with its delightful but essentially pointless hidden chamber of secrets, and the stupid little hatch wouldn’t open. Damn the underpaid, underage worker who probably made this thing. I struggled and sweated, but the plastic latch wouldn’t budge.

Mom, wanting to run away and slam her bedroom door but unable to ignore the possible medical implications of what might be transpiring: “What are you doing? Are you okay? Do you need your asthma inhaler?”

Me, grunting and clawing and finally succeeding in getting the hatch open, only to discover that the hatch was no longer connected to the fake-watch, rendering the contraption useless, and my prized quarters were now flying across the room in one of those inverse reactions where what you need to happen is not what happened at all: “Ohhh….”

One of the errant quarters sailed an admirable distance and smacked into the forehead of a non-admirable sister who had just pranced into the kitchen, prepared to spill the beans on yet another sibling who was currently doing something that they shouldn’t in the backyard. Said sister, showing great adaptability in a fluid situation, quickly changed her tune from “I’m here to report an indiscretion” to “My utter innocence has been unjustly maligned by the wicked ways of the oldest sibling who is not all that you think he is.” Wailing ensued.

Note: The picture used for this post, which is obviously not of my hometown McDonald’s, is from an article in the UK Daily Mail.