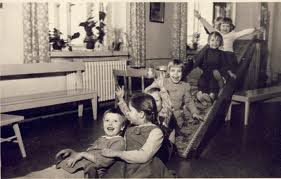 It seems that many future Tea Party starlets missed some critical days of training during their early schooling, probably because they were already so busy attending questionable church festivals and taking baby steps toward their eventual insanity. But in the interests of fairness and the slight possibility of redemption, let’s review some fundamental points that some people missed…

1. There was a reason for the safety scissors.

As with many potentially dangerous implements, it’s a good idea to start slowly with the learning curve. That’s why safety scissors had cute little round-end blades and the inability to actually cut much more than air. This was to keep first-timers from running around all hog wild, hacking away at everything they could get their hands on. Improperly-trained cutters will just grow up to slash everything in a budget that doesn’t directly fund something that will benefit their personal revenue stream. This is a bad thing.

2. Sometimes you have to work together with other people.

This is why a good kindergarten program includes structured group activities such as everyone participating in the creation of a mural about happy bunnies or a colorful pageant celebrating Thanksgiving harvests and side-dishes. The program does not include activities that encourage the ignoring of other schoolmates’ concerns, or demanding that your own agenda be the only thing on the table or you’ll jack up the credit rating of an entire country. In fact, a good program would send this self-involved child to a quiet room where he can think about his actions while a stern letter is sent to his parents and constituents about what really happened.

Granted, it can cause an intestinal disturbance, which isn’t necessarily a bad thing, since we’ve already noted in your progress report that your system needs some serious flushing out. But on the flip side, it can also cause you to have visions of Jesus instructing you to do idiotic things and then be obnoxious when confronted with the idiocy. (Side note to those with severe vision-based behavior: Contrary to the checks you get in the mail, Jesus is not two brothers with a four-letter-word for a last name.)

4. A package of construction paper has a rainbow of colors.

Just like people. And they all start out the same size.

The cookies don’t all go to just a few people, and no one controls the price of the juice so that their donors can make more money.

6. When your tummy hurts, you get to go see the nice nurse and she takes care of you. End of story.

Our nurse helps everyone. She doesn’t care if your clothes are a bit worn or if you’re not driving a high-end tricycle. She understands that some mommies and daddies, no matter how hard they work, are just not in a position to pay the outrageous medical fees charged by Evil Bastard Medical Conglomerates. (And the EBMCs control half of Congress, making the whole situation even more annoying.)

Our nurse has a colorful poster on her wall. Can you see it? It says “Universal Healthcare for Everyone”. It doesn’t say “Do everything you can to destroy the Affordable Care Act just because your party didn’t win the White House and you are so bitterly twisted about it that you are willing to let decent people suffer”.

7. If you take out the alphabet blocks on the bottom of the tower, the whole thing falls over.

This is a fundamental, irrefutable precept that is being ignored by some folks who want to decimate the productive classes of society and hand the leftovers to the rich. (The rich already have so many leftovers they are scrambling to find enough banks in the Cayman Islands to hide all that mess.) If there are no worker bees, eventually there’s no honey, and you end up being the King of Nothing but Air. This would mean that Dora the Explorer would have to read her own maps and find her own food without the assistance of lower-paid, over-caffeinated friends and jungle animals. Little Dora would die in the forest, clutching her empty designer backpack.

8. You have to say the entire Pledge of Allegiance.

Not just the parts you like. And not just the part about God that wasn’t even added until 1954 by right-wing extremists (surprise!) when they used the concept of Communists to scare the hell out of the population. (Instilling illogical and unfounded fear in their voting base is a fundamental bolt in the rickety Tea Party framework.) And you can’t cross your fingers behind your back when saying any of the parts.

9. You have to follow all the rules of Chutes and Ladders.

10. Don’t be a pushy bitch on the playground.

The American playground is not all about you, and you need to tone down the snippy attitude of “I got mine so now I’m going to make sure nobody else gets theirs” .You’ll get a second chance to go down the slide after everyone else has had their turn. Everyone. Not just the people who watch Fox News and eat the paste.

(Originally published in “The Sound and the Fury” on 08/26/11. Revised and updated with extra flair for this post.)