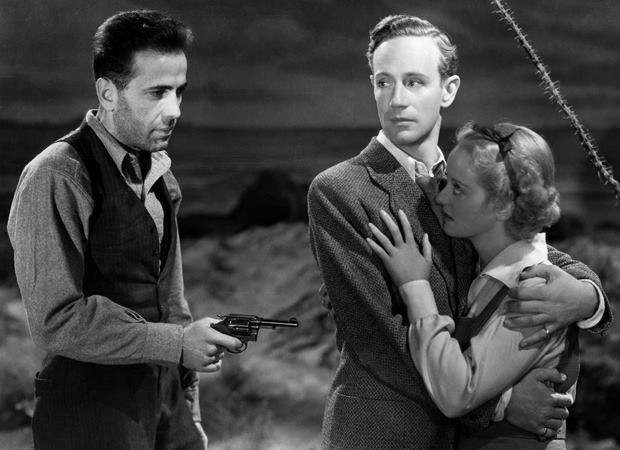 Humphrey Bogart: “I told you to stop arguing with me. Don’t you understand that I have a gun pointed at you?”

Bette Davis: “But that’s what I’m talking about. I can’t take that gun seriously. Did you steal it from one of the munchkins in The Wizard of Oz? I have hair barrettes that could do more damage.”

Leslie Howard: “Bette, let’s not antagonize the man. He has hair like James Dean will eventually have, so you know he has issues. And he hasn’t shaved, which really accents his jaw… his manly jaw and… what were we talking about?”

Humphrey: “Both of you need to shut up. I just renewed my contract with Warner Brothers so I’m not the one that’s going to die in this scene.”

Bette: “I’m not scared of you. I just won my first Oscar, bitch.”

Leslie: “Well, I’m scared. Should I give you my phone number so we can talk about it?”

Humphrey: “Aw, screw it. I’m done with the both of you. I’m just gonna go over here and wait for Lauren Bacall to get discovered.”

Bette: “Hold up. You can’t just belch your way in here and threaten everybody with a party favor and then not follow through. If you really want to win that Oscar, somebody has to die in this scene.”

Leslie: “Now, Bette. Winning awards isn’t all that important. Possibly dying before I officially come out of the closet? That ranks a bit higher. Let’s not be so pushy with James Dean.”

Humphrey: “Both of you are insane.”

Bette: “Oh, that’s another way to win an Oscar. Maybe we can make some script changes. Where’s the screenwriter?”

Leslie: “He clearly gave up on this post about three lines ago and is just letting it drift back into harbor on its own.”