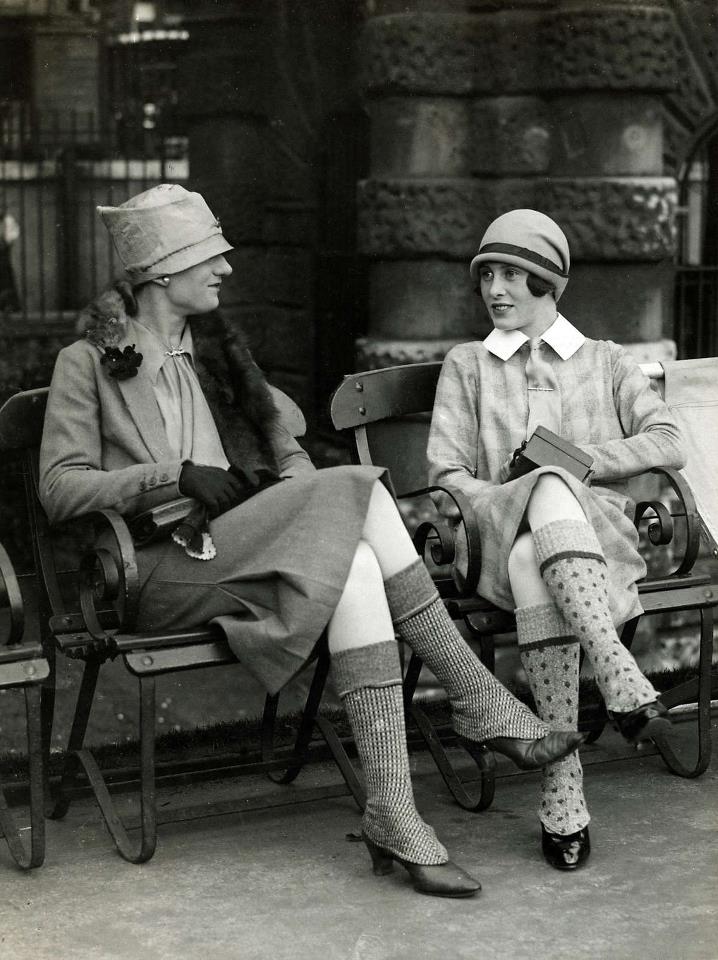 Clarissa, left: “Bernadette, honey, I don’t know if you were right about this hat.”

Bernadette, right: “Don’t be silly. It’s terribly fashionable and it makes a statement.”

Clarissa: “The statement it’s making is that I can’t see a damn thing. I’m just looking in the direction of your voice and hoping for the best.”

Bernadette: “You really shouldn’t worry about it. I’d be more concerned that the animal around your neck isn’t quite dead, as it seems to be nibbling on your trendy Gothic carnation.”

Clarissa: “I can’t see that, either. Would you be a dear and make it stop?”

Bernadette: “Oh, no, I couldn’t possibly. That would require me to temporarily relinquish my hold on this cryptic box I’m clutching, and that would completely ruin my ensemble. Fashion is performance art, and wrangling livestock is not in my script.”

Clarissa: “I see. Would it be rude of me to suggest that your lack of concern for my personal well-being is coming across as a bit bitchy? What if my accent piece has rabies? It would greatly perturb me if I have to seek medical attention just because you fancy your special box. I would certainly give up my own box if certain situations arose.”

Bernadette: “Yes, dear, we all know that you give up your box quite frequently.”

Clarissa: “I am appalled that you would say that, especially given your own history of box relinquishing. At least the number for my box hasn’t been scrawled on lavatory walls across the city.”

Bernadette: “I sense that I may have underestimated your sensitivity concerning boxes and what one does with them. Perhaps I’ve had too much of the high-octane coffee we’ve been guzzling for hours as we wait for something meaningful to do with our lives. Can we move past it and be friends again?”

Clarissa: “I’m not sure. Now that I ponder this situation, it occurs to me that you are the one who suggested all of the couture choices that are now causing me discomfort and trepidation. I think you have a dark ulterior motive that reeks of unseemliness. Are you purposely making me look wretched just so you and your worn-out box will appear more attractive by default?”

Bernadette: “Perhaps the coffee is buzzing me toward the dark side once again, but I must say I’m surprised you finally connected the dots. I’ve used you for years. All the great fashion icons know that the best way to become a diva is to surround yourself with those who couldn’t put a decent outfit together if their lives depended on it.”

Clarissa: “You are a nasty and vile human being.”

Bernadette: “And you look like a hooker at an outlet mall.”

Brief pause whilst further accusations are considered and the potent coffee we cannot see in this photo cools considerably.

Clarissa: “I suppose one of us should slap the other and stomp away in a rather dramatic fashion.”

Bernadette: “Probably. But it took us forever to get our socks to look just right. We should stay for at least another hour and soak up the compliments that are surely coming our way.”

Apparently-alive stole around Clarissa’s neck: “Could one of you pass me the salt? This carnation is a little bland.”

Note: For those comparing notes, the original version of this Past Imperfect simply read “Every once in a while, even the drag queens miss the mark a bit…” I decided to add some extra ingredients.