Sense and Sensuality on the Bridge of Sighs: Don’t Look Now 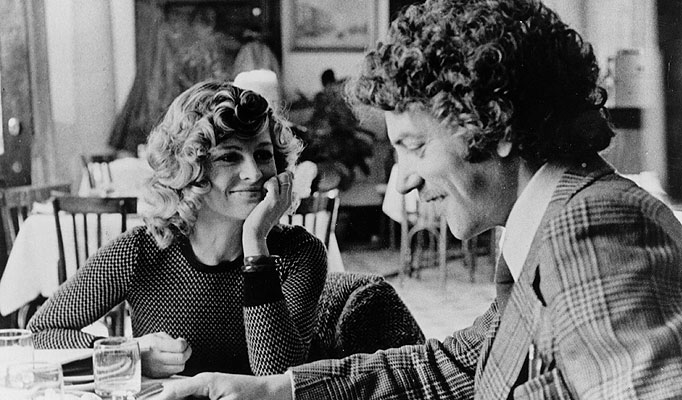 Note: The following is the second of two movie reviews I’m doing for Maddy’s “Horrorathon” that she is hosting on her site, “Maddy Loves Her Classic Films”. Okay, that’s a bit of lie, in that I’m not actually putting this one together. Since I’m busy packing things up for another weekend in a cabin in Broken Bow, Oklahoma, I have asked Scotch the Cat to take over the narrative responsibility. He initially declined, but we eventually reached a compromise when I explained, once again, that I control the pantry door wherein are kept his sacred kitty treats. I must be kept happy or the portal will be forever sealed. Scotch then resigned himself to his fate, fixed himself a nice cup of catnip tea, and began typing…

I’m here to tell the story about a movie we watched today called “Don’t Now Look”. It happens somewhere that is not here and there’s lots of water and I think somebody died and-

[Sounds of disruption and urgent relocation.]

Please excuse the ineptitude of my brother. I knew it was a terrible mistake when Our Father inexplicably assumed that my wretched sibling was capable of providing any type of cultural insight whatsoever. Scotch is a complete dolt, as evidenced by the fact that he can’t even get the name of the movie right. Before he could finish banging out the second sentence of his dismal failure, I knew I had to intervene. (It was quite simple, really. I mentioned that a bird had been spotted in the backyard. He aborted his malignant mission and raced off, hyperventilating and drooling, mind mad with desire. It will take him at least three hours to discover my mendacity.)

My name is Cleopatra. I’m the other cat here at Bonnywood. I am rarely mentioned, because that’s the way I like it, as detailed in the contract I forced Father to sign upon my arrival. Father and Scotch can frolic all they want in Blog Land. I normally don’t have time for such pursuits, as I prefer to engage in more esoteric matters of a less-base nature, such as the perusal of fancified celluloid. In fact, I have a doctorate in Filmic History and Interpretation. (Father would know this if he wasn’t so self-absorbed.) As such, it is my moral compunction to rectify the atrocious banality of my insipid brother’s review. We shall start again.

“Don’t Look Now” (it’s only three words, Scotch, how did you fail so miserably in the alignment?) is a 1972 film directed by Nicolas Roeg. He is worshipped in certain circles for his oeuvre, a limited collection of films that are truly unique in their composition. They are purposefully non-linear, with flashbacks and flashforwards that force the viewer to pay attention. I find this much more engaging than most cinematic “blockbusters” where the entire story is blatantly telegraphed from the opening scene. (We’ve all seen enough “movies” that mainly involve car crashes and scantily-clad nymphets undulating on the hood of said cars before they crash. Surely you want more out of life.)

This film features Donald Sutherland and Julie Christie, at a time when Donald’s star was firmly in ascendance and Julie’s star was still admirably glowing from her work in the 60s. They are both in peak form, as a married couple dealing with the aftermath of a life-changing event presented in the opening scenes. Their chemistry is palpable, especially in an extended montage concerning an overtly-lusty romp in a hotel room (prepare yourselves accordingly) wherein Roeg’s mastery of the fluidity of time is in full evidence.

As an aside, I should point out that there are two other stars of this film. One is the city of Venice, Italy. I’m not sure this story could have worked in any other locale, brimming as the city is with its wetness and beautiful decay. (Proper credit for this location choice should be given to Daphne du Maurier, who penned the original story.) The other standout is Donald Sutherland’s hair. It’s unruly, immense and intimidating, and I must caution you to accept its presence and move beyond such; otherwise you will miss important plot devices as you gaze in wonder, and considerable fear, at his coiffure.

This film is, after all, a horror mystery, albeit one that is filled with stunning location shots and lyrical imagery that is hypnotic and intoxicating. You quickly learn that you can never fully trust what you are seeing, yet you must also unlearn that point of view when the dominoes begin to topple and the story comes full circle. The ending montage, with more of that time fluidity, is a justifiably famous example of art in motion.

Please give it a look, won’t you? Now, I’m off to find Scotch, my challenged brother. If I don’t remind him to feed himself, he’ll starve. And really, isn’t that an accurate reflection of so many troubled souls in modern society?

(Also known as Cleo by my close friends, but you and I aren’t quite there yet. Watch a few more decent movies and get back to me.)

If you have the time, please drop by Maddy’s site and enjoy the Scary-Movie themed reviews and articles she has coordinated for her “Horrorathon”. The actual blogathon doesn’t start until the 26th, but you can find more information and a list of the upcoming blog pieces by clicking here.

Personal side note to Christi: THIS one.