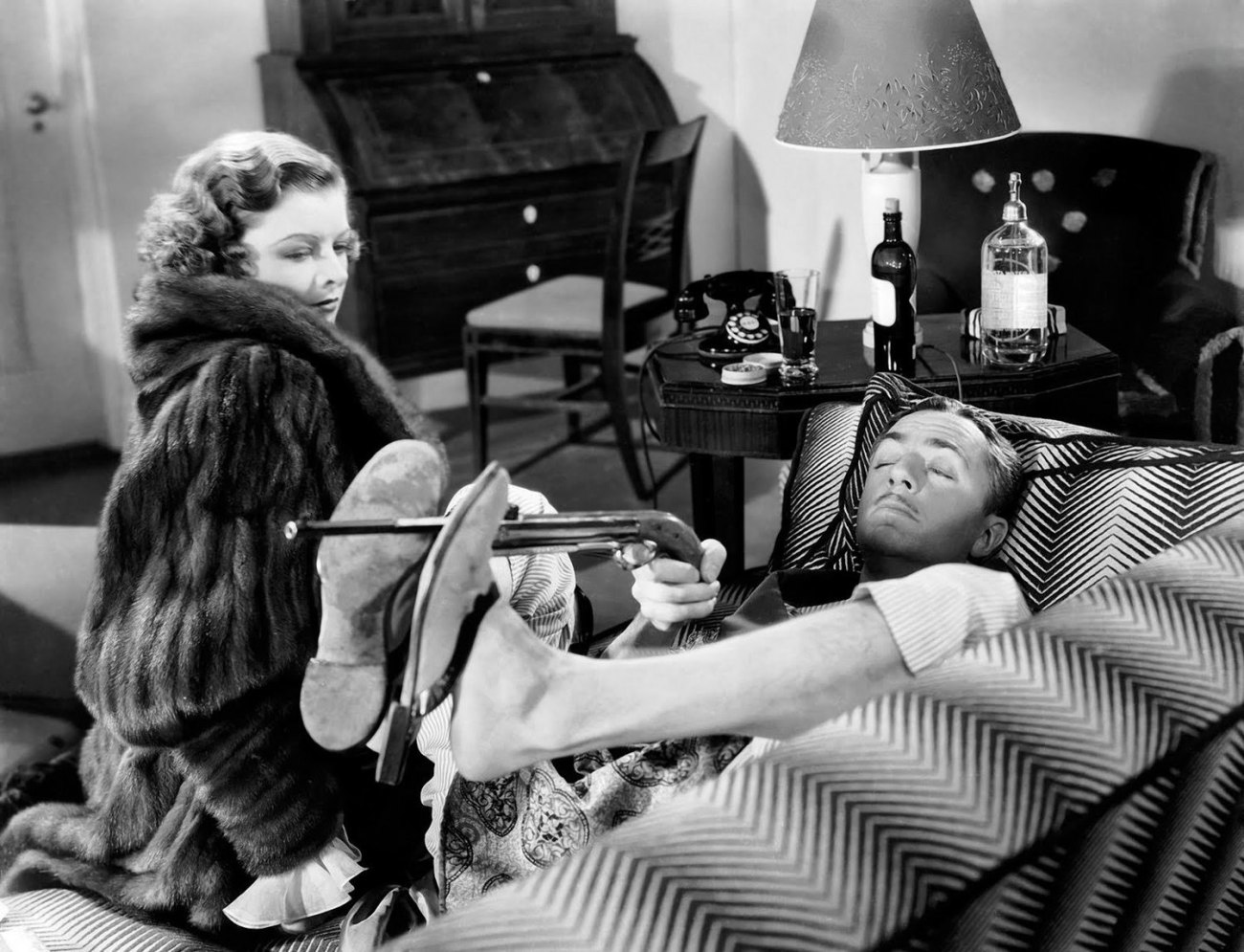 Nora: “Darling, must we really do this?”

Nick: “I have no idea what you’re talking about.”

Nora: “Of course you have an idea. You have an odd-looking piece of artillery positioned precisely above your crotch. I’m not sure what you’re trying to prove. We are both fully aware of the design specifications of your nether protrusion and you are making much ado about nothing.”

Nick: “Why must you constantly question my tactics and my tackle? If this makes me feel masculine and somehow relevant, shouldn’t you ignore my desperation and go cross-stitch something or other?”

Nora: “Well, if your intention is to promote your masculinity in a delusional manner, I suspect that the first speed bump you will encounter is how those wretched slippers dilute any hint of testosterone.”

Nick: “What’s wrong with the slippers? I find them rather fetching.”

Nora: “Perhaps you do. But the first thing that comes to mind is Beauregard, my hairdresser. He would sport such footwear without hesitation, possibly leading to an interpretive dance once he put them on. He would also sport no degree of shame whatsoever.”

Nick: “My dear, you seem to be impugning gay people. Have I misjudged you all along?”

Nora: “It’s possible that my words did not come out as intended. There is no negativity in my carefully-orchestrated aura when it comes to the gay boys. After all, it’s a valid argument that my career would not be what it is without the angelic intervention of flamboyant men who knew just the precise thing to do with my hair at pivotal moments. What I’m trying to say is that if you want to get all grunting caveman about the proceedings, you should lose the slippers.”

Nick: “Then what would you suggest I do otherwise?”

Nora: “Well, my first instinct is that you should partake of the alcohol available on the Art-Deco table just to your left. Should that fail to bring you down from your ledge of annoying hysteria, we can move on to more aggressive therapy, which may or may not involve a brisk slap to your face but will not involve any guilt on my part. We’ll flesh out the details, should we progress to stage two of this intervention. The slapping will not be necessary should you simply relinquish the firearm in a gentlemanly manner that does not result in the accidental shooting of our gardener, who is just outside those patio doors, fiddling with marigold arrangements and cursing his decision to not pay more attention in high school.”

Nick: “I see. Well, you seem to have spent a considerable amount of time contemplating lengthy comebacks to anything I might have to say in a situation where I am accused of over-fondling an elongated shaft, an eye-opening obsession that I will pursue in part two of my own intervention. But part one of my counter-intervention involves asking why you are wearing a fur coat.”

Nora: “There’s nothing wrong with women wearing fur in this era before people who are not me decided that doing such was justification for throwing red paint on socialites who are simply trying to deplete the family money in a fashionable but clueless manner.”

Nick: “But this is Palm Springs. In September. It’s 137 degrees outside, negating the need for animal skin couture. Are you trying to make a political statement about your own nether nexus? Has the shrubbery gone wild? Are we in need of an aggressive trimming? Perhaps it’s a good thing that I didn’t shoot the gardener.”

Nora: “I cannot believe you just went there.”

Nick: “Logistically speaking, you haven’t allowed me to go there in quite some time, with the mysterious headaches and your moving to a bedroom in another wing of the house, but we’ll leave that angle for another discussion. Yet you didn’t hesitate to malign my manhood with a glee that is almost maniacal. What’s the real story here?”

Gardener, opening the patio door and poking his head in: “Miss Nora, pardon the intrusion, but I just can’t figure out where to place these marigolds.”

Nora: “Ah, now I understand why we are bickering endlessly in such a pointless manner.”

Nick: “Pray tell, because my legs are getting tired.”

Nora: “The writer of this scene doesn’t have an actual end-game in mind, so he just keeps creating dialogue as he fumbles towards a resolution.

Nick: “How on earth did you come to that conclusion?”

Nora: “Because the gardener is obviously the writer, admitting his lack of focus with a subterfuge about marigold placement.”

Nick: “That seems a bit stretched and absurd.”

Nora: “Like the symbolism of the gun betwixt your legs?”

Nora: “See? This is clearly a psychological cry for help. We must do our part, because if we don’t support the writers and the gay hairdressers, none of us would have careers.” She turned to the gardener writer. “The marigolds look lovely just as you have them. Please take the rest of the day off and spend some time with your family.”

Nick: “I don’t think this is a satisfying ending to the story.”

Nora: “And that’s exactly what I think every time you attempt conquest in my garden. Which is why I now sleep in a separate zip code in this house. Tomorrow is another lay.” She and her fur turned to march defiantly away from all this mess, opening a door that no one had really noticed until this point.

Gardener: “Miss Nora, about the personal trimming you spoke of earlier this afternoon…”

Nora: “Not now, Gardener Writer. I’m making a dramatic exit and everyone knows that the lead actress must have the final word. But I’ll leave the key in its usual place.”

Gardener: “Not as much as I’m onto you.”

Marigold #7 in Pot #3 on the patio: “You know, it seems that Gardener Writer just used this same plot twist in a post not that long ago. Do you suppose his soul has grown barren?”

Marigold #8, same pot: “You’re assuming that his soul was fertile in the first place. But you’re right, Mary. There’s been a lot of recycling around here lately. Should we stage an intervention?”

Marigold #7: “Not just yet. After all, he had that fever dream the other night that resulted in a passably-decent fresh post. He might have one or two good stories left in him before we need to take a closer look at that brochure from the Beaver Valley Home for the Incorrigibly Tragic.”

Marigold #8: “Fair enough. For now, we’ll just sit back and watch these sad little stories play out. Could you pass me that bowl of popcorn?”

Marigold #8: “Then who made the popcorn?”

Off in a distant corner of the yard, seated in a lovely wicker chair placed under a charming lemon tree, someone closed his laptop and smiled.

Originally published in “Crusty Pie” on 09/15/17. Some changes made, as a writer should always try to protect his honor, especially when the plants start talking…