The Waltz of the Confused Virgins: Taylor Swift – “Love Story” 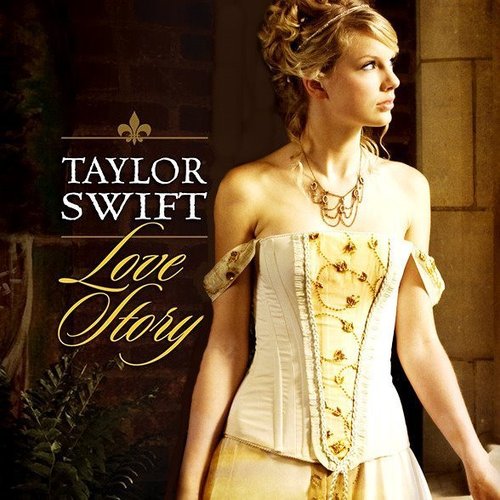 And another music video review…

We’re on a college campus, with Taylor walking along and looking forlorn, when she suddenly spies a boy sitting under a tree. He spies her spying. They are both suddenly transfixed with each other, with hints of possible recognition registering on their acne-free faces. (He’s really cute, which is a requirement in most music videos, so if she doesn’t really know him she probably should.) As they continue to be model-perfect, she (or maybe he, who knows) starts getting flashbacks of a past life they apparently shared.

We’re transported back to old-timey days (which would be 2004 for Taylor, but several hundred years for the rest of us), and Taylor is now standing on a balcony opening off a humongous house. Based on the couture of the extras milling around, we appear to be in, oh, let’s say the 1600s. (Shorthand-breakdown of the symbolism: she’s playing Juliet, and she’s wishing for a Romeo. We’ve all been there.)

Next thing we know, Taylor’s in a ballroom, with lots of candles plunked hither and yon. (Which means that electricity hasn’t been invented yet, so nobody can charge their social-media devices. Those were truly dark times, and people suffered.) But at least everyone is beautiful, and that’s all that really matters in the end, especially if you want your song to make a splash on the record charts, so you can be on “Good Morning, America”. Of course, you’ll have to wait for America to actually be a country, but times were simpler then and people were used to waiting for something interesting to happen.

The extras in the ballroom are suddenly unimportant, because Tree Boy from the opening scenes of the video saunters in, all seductive with his casual hairstyle and that enormously-poofy tie-thing around his neck. He doesn’t bother to sign the guest register, because he’s only here to notice Taylor, and she’s clearly ready to be noticed, especially since that’s what it says in the script. They are completely enraptured, in that rapturous way that only happened back in the day when people couldn’t travel a lot and didn’t realize that there were other options on the menu.

Before the Lusty Duo can proceed to the randy options that they both clearly want, some fool decides that it’s time for a waltz. (This is probably the result of the party planner, those irritating people who run about with clipboards and make people do things they don’t really want to do. Those annoying gnats have been around for centuries.) So everybody lines up for this unwelcome waltz, and I guess they didn’t have a lot of time to practice, because the extras are really bad at it. But everybody’s still pretty, and Taylor and Tree get to do cute things with their hands.

The waltz goes on for far longer than it should, since modern attention spans are very short, and nobody is doing any rapping and everybody is remaining clothed. (The producers let the scene play out and cross their fingers that it won’t affect album sales.) Toward the end of the primly-sedate, non-dirty dancing, Tree leans in toward Taylor and whispers something. He might be suggesting a future tryst, or he could just as easily be asking if she could validate his parking ticket.

Later that night, or that century, who knows, Taylor is trudging through a forest that we don’t know about because we don’t have a brochure. She’s holding up an oil lamp, acting like she’s using it to light her journey, but she’s really hoisting the flame so the camera can get good shots of her dewy skin. Suddenly, there’s Tree Boy, standing next to one of those creepy statues from “Interview with the Vampire”. (Seriously, stop the video at 1:40. Anne Rice would be proud of that visual.) I hope Taylor’s got a wooden stake up in that petticoat, just in case things take an unexpected turn.

She goes up to him and discreetly puts her finger across his lips. (“Shhh. Don’t tell me you’re a vampire. It’s been a long day, singing on the patio for hours and then all that dancing, so I really don’t have time for any more issues.”)

Then they wander around the forest for quite a bit, holding hands and chatting, the oil lamp never more than three inches from her peachy face. (Girl, careful with that burning oil, that weave will go up in a flash.) Of course, this is a chaste little video (all those tween-ager fans out there, sayin), so despite trudging through enough forest that we should be in Finland by now, they end up just petting a horse who is conveniently standing nearby instead of them having sex.

Whoops, I may have lied about the discretionary aspects of this video. After Tree reluctantly wanders away from the non-trysting with Taylor, adjusting his pants and possibly heading to a hut in the forest that he shares with Hagrid, we see Taylor plucking a cherry off a tree. We might be in a chaste time-zone, but it’s fairly obvious that Taylor plans to be a woman soon.

Or maybe not. We now have Taylor back on that balcony, and I guess it’s been a while since she went to the zoo with Tree, because she’s singing the part about how she hasn’t seen him in so long and wonders if he’ll ever come save her. (And I’m thinking, honey, if you needed some gardening, why did you send the gardener away instead of asking him to unfold that enormous tie into a naughty landing-zone on the forest floor?) Lo and behold, once she pauses in her incessant warbling of the song, Taylor spies Hardwood walking out of the forest, headed her way.

Ecstatic, she starts racing down endless flights of curving stairs, the 20-foot train on her dress artfully billowing out behind her. We now have quick cut shots between the two of them, with her performing swift maneuvers with her slipper-encased feet and his scenes shot in slow-motion. (Hardwood only has to conquer about 5 feet of grass in his quest, but Taylor has an entire plantation house to navigate, so the editor had to get a bit creative with the meet-cute.)

After Taylor finally finishes running across what looks like a small country, the lovebirds make contact in the middle of a field that we haven’t seen before, so we’ll have to assume that there might have been some location issues with this shoot. Still, they seem very happy to have found one another after apparent decades of unsatisfied longing and presumed non-access to an Internet that hadn’t been invented yet.

But instead of pawing away at each other like any almost-lovers would after a long separation, even one that doesn’t make any sense, they simply join hands and bang their foreheads together, gazing longingly into each other’s eyes. (I’m not sure why they would want to do that. Have you ever tried it? When your faces are that close, your partner’s eyes meld into one and it looks like you’re on the verge of frenching a Cyclops. I wouldn’t consider such an image to be an aphrodisiac, but maybe that’s just me.)

And it seems the video-editor notices that we have a lack of true unbridled passion as well, and he throws in a bunch of different angles of the couple not actually doing anything so it seems like more is going on than really is. Still, they don’t even bother to kiss. Even if this is Elizabethan Times or whatever, with all the faked morality and chastity belts, you know that people still had sex or the human race would have ended. That’s basic math.

Then we flash forward to modern times, back to that opening-scene college, where apparently no one actually attends classes but instead the students wander the campus in search of reincarnated lovers. New-Age Taylor and Tree approach each other, recognition and passion swelling, but this time they don’t hold each other’s hands, probably because Taylor is carrying some stupid textbooks that she never uses and Tree’s arms are worn out from styling his hair for three hours. Instead, they just stand very close and smile, then the video fades.

Does Taylor Swift even know how the first Romeo and Juliet saga played out? Just wondering, because that story had some serious issues in the final act, and it wasn’t pretty. But at least the original players got to wallow around in a bed whilst Friar Lawrence or whatever his name is looked the other way and fiddled with some holy water. Taylor and Tree? They don’t even make it to first base and nary a stitch of clothing is tossed aside. But they do manage to get some decent glamour shots for their portfolio, so I guess it’s all good…

Originally published in the Backup Dancers From Hell sites, then “Bonnywood Manor” on 09/21/15. Slight changes made. For the record, nothing like this ever happened to me during my college days. Perhaps I shouldn’t have gone to one in Oklahoma. Nothing ever happens there, including progress…