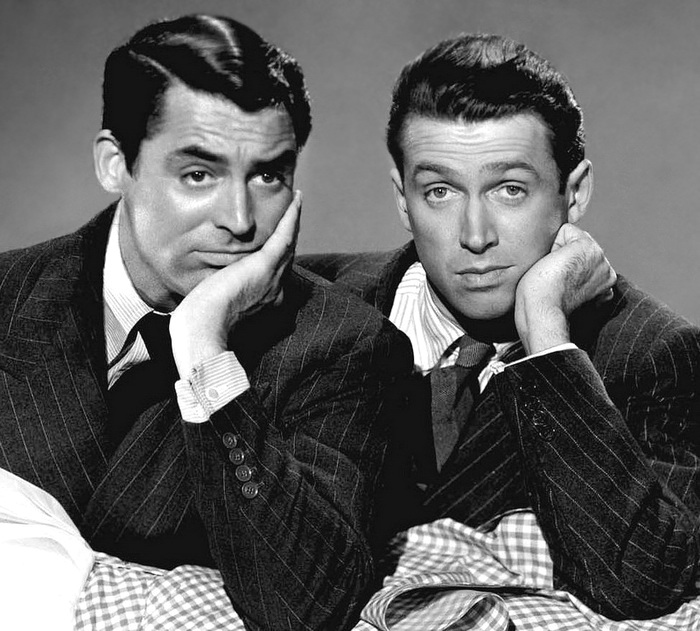 Cary: “You know, there are rumors about me being gay, especially when it comes to playing slap and tickle with a certain roommate I had back in the day.”

Jimmy: “Well, there are rumors about me refusing to play slap and tickle with certain socialites with far too much time on their hands. So, we’re sort of in the same boat. But your boat is apparently flying rainbow flag. My flag still has a question mark.  I bet you have better cocktails than I have on my boat.”

Cary: “And I suppose it doesn’t help that we’re posing in matching suits. Isn’t that what the gays do, shopping at the same stores and all of them looking alike and knowing all the words to the same Broadway tunes?”

Jimmy: “I don’t know about that, at least not on the record, but you could say the same about the socialites. They all pretend to read the same books and they all know how to be extremely bitchy for no apparent reason, just like Sarah Huckabee Sanders and Rudy Giuliani. Besides, there’s always talk about actors in Hollywood. It’s just part of the job, like pretending that the director is actually responsible for the movie when we all know it’s the editor.”

Cary: “So you’re not worried? About what it could do for our careers? Because I really don’t relish having to get a real job and use my real name. Do you know how hard it is to be taken seriously when your name is Archibald?”

Jimmy: “I’m not worried about the rumors, no. But I am worried that we appear to be posing over the corpse of Dorothy from that ‘Wizard of Oz’ movie. This is not going to play well in the fly-over states.”

Dorothy, rousing briefly: “Auntie Em? Why are there two of you?”

Dorothy slumps back into the poppy field, mumbling about munchies and a sudden yearning to listen to Pink Floyd’s “Dark Side of the Moon” and, sadly, letting loose with a bit of digestive effluvia. Three nearby munchkins stopped dancing and singing and raced off in search of their union steward, a young Randy Newman. (Munchkin #2: “I cannot work under these conditions.” Randy: “But aren’t you always working under everybody else? It’s a matter of logistics, right?”)

Cary: “Well, that bodily outburst was a bit unfortunate. Now it smells like the tabloids in here.”

Cary: “It’s so sad what some people believe. Speaking of, what should we do about these blasphemous rumors concerning our bed partners?”

Dave Gahan, lead singer of Depeche Mode, suddenly wanders on stage and begins warbling. “People are people, so why should it be, that you and I should get along so awfully?”

Jimmy: “What the hell is he talking about?”

Cary: “Not sure. But I can promise you I never slept with him. At least not that I recall. There’s been some drinking in my life.”

Jimmy: “I give up. This mess is so off script at this point that I might as well fasten my seatbelt and prepare for a bumpy night.”

Dorothy, rousing briefly once again: “Auntie Em? Both of you? Why are so many people singing? I’m supposed to be the star of this show.” Clears throat. “Somewhere, over the rainbow, equality birds fly…”

Scotch the Cat suddenly wanders on stage and taps the writer on his shoulder. “Daddy? Where are you going with this piece?”

Brian: “I’m just trying to get us back to where we once belonged. Before half of this country decided that hate was the answer.”

Paul McCartney suddenly wanders on the stage. “Some people want to fill the world with silly love songs. What’s wrong with that?”

Because here we go, again.

Originally posted in “Crusty Pie” on 11/02/16. Considerable changes made. And yes, this one is crammed with obscure musical references, because I live for such things. (Extra bonus points for those who figure out the Pink Floyd angle.) I simply cannot understand hateful intolerance. You may say I’m a dreamer, but I’m not the only one…