I Never Knew You Could Do That with a Chicken 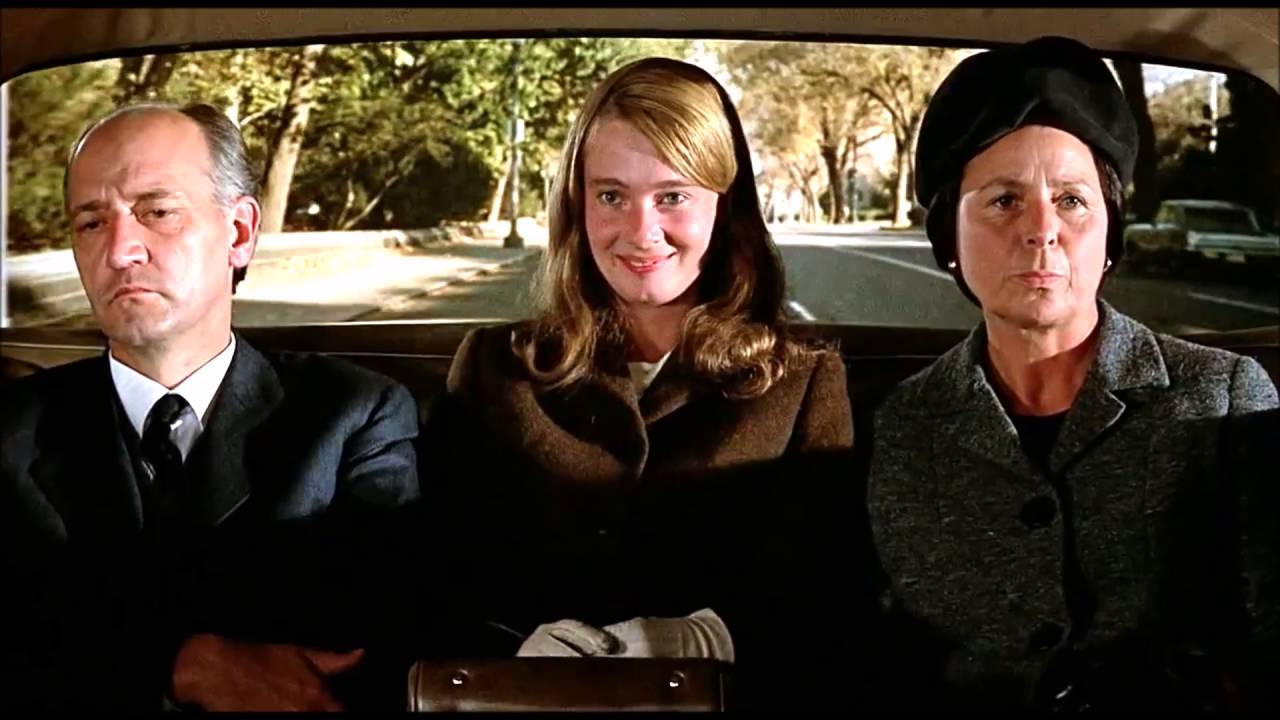 Note: This is my entry in Maddy’s “Second Annual Hitchcock Blogathon”, wherein I discuss Hitchcock’s 1969 film, “Topaz”, based on the Leon Uris thriller. Even if you aren’t especially fond of movie reviews, this is Bonnywood and you can trust that things go off the rails a bit.

We start out with some old black-and-white footage of a military parade in Moscow’s Red Square. We know that Hitchcock didn’t shoot this segment, mainly because he couldn’t afford to pay the roughly 4 million men stomping around the square and paying homage to Lenin or Stalin or whoever was the maniacal Soviet dictator at the time. Hitch clearly knicked the footage from somebody else. But he gives the scenes his own spin by having someone colorize certain bits, using a startling red hue just so we can fully understand we are viewing Evil Communistic Activities.

Then we jump over to Copenhagen because, well, why not?

There we watch a small family (cranky-looking dad, badly-permed mom, presumably-bitter adult daughter who is still living with them) as they furtively leave what looks like a fortified residence/gulag/possible Russian Embassy. There are some very long scenes at this point, meant to build tension as we wonder what they hell they are doing, but the bottom line is that they are trying to seek asylum in America. They do this in a head-scratching manner by touring a ceramics factory, breaking some crockery, running at appropriate moments, and making a frantic phone call to someone in Washington (John Forsythe playing “Mike Nordstrom”) so he can arrange for a diplomatic Uber, pronto. He does.

The plan almost goes awry at the last minute when the daughter, apparently feeling she’s not getting enough screen time, loses her mind when the family is running across a busy street and she slams into a motorcycle going roughly three miles an hour and easily avoidable. She then falls to the pavement and writhes about in a lurid example of what can happen when you hire actors who can’t act. The Uber team manages to hurl her melodramatic ass into the escape vehicle just in time, before ugly people with guns start shooting.

Once in Washington, the family is ensconced in a huge mansion, which is apparently what the American government does with deputy chiefs in the KGB who decide to run for the border. Daddy is a pompous twit and we hate him immediately, but he has the down-low on Moscow so all the official minions running about try to keep him happy. (This includes a car-tour of Washington wherein the daughter has a small orgasm when they drive by The White House. That girl really has some issues.)

We then meet Andre Devereaux (Frederick Stafford), a French diplomat. He has a wife, Nicole, played by an actress even worse than the actress who went ass-up Copenhagen. She’s extremely high-strung for no apparent reason and has one of those flip hairdos that were all the rage for three seconds in the 60s and were then banned forever. She whines (and wines) incessantly and makes weak jokes about Yankee Pot Roast. I will not be sending her a Christmas card.

American agent Mike meets with Paris agent Andre. The asshat KGB guy has spilled the beans on a possible Russian/Cuban plot that needs verification. The Russians and the Cubans hate Americanos, so would Andre mind running with the ball on this one? During their conversation, this eye-opening exchange takes place…

Andre: “You and I have done things for each other that no other agents would do.”

I smell a rainbow flag. You?

Andre agrees to help, partly because we wouldn’t have a movie if he didn’t and partly to get away from his flip-haired wife in the other room. (Quick scene with cognac-swilling Nicole eyeing her trusty carbine prominently-displayed on a wall and muttering “I used it in the Resistance.” That’s a thread I’m not pulling.)  The first item on Andre’s subversive itinerary is to get his hands on documents currently in the hands of a Cuban named Rico Para. Sadly, this Rico never learned about sharing as a child, so this might prove difficult. On the flip side, Rico’s assistant, Luis Uribe, will happily sell his soul for some pocket money. Both of them can be found at the Hotel Theresa in Harlem. Go forth and conquer.

Andre opts for a less-direct route, instead enlisting the help of one Phillipe Dubois (Roscoe Lee Brown), a florist (yes, florist) near the hotel who apparently dabbles in espionage when tulips are out of season. Phillipe enters the hotel and, whilst Andre watches impotently from across the street, he manipulates the situation to gain access to the upper floor where Rico (and Luis) can be found. This extended sequence is done from Andre’s viewpoint and therefore we cannot get any of the interior dialogue. (The artsy part of me would like to think Hitchcock is making a tribute to the film “Rififi”, with its infamous 28 minutes of silence during a heist, but I may be wrong.) In any case, this is my favorite part of the movie, with purely visual storytelling.

Phillipe manages to get upstairs, where he meets with Luis and convinces him to steal Rico’s briefcase while Phillip distracts Rico, in yet another extended scene wherein both Phillipe and Luis surreptitiously gaze longingly at said briefcase with sexual intensity. The plan works, and the two scurry back to Luis’ room, where they have a conversation in which Phillipe utters yet another mystical bit of dialogue: “I’m not going to fail in your bathroom.”

Two seconds later, Rico discovers the ruse. He and a flame-haired assistant known as Hernandez approach Luis’ room. In a typical Hitchcock shot, we zoom in on something that Hitch really wants us to focus on, which is Rico’s hand on the doorknob. He jiggles it for far longer than is necessary, then he turns to Hernandez and says…

And this is where I have to stop babbling about the plot. There is much more to the story, as at this point we are just shy of the one-hour mark, and this is a two-hour plus movie. The plot gets very twisty, and I don’t want to ruin it for those who might be contemplating a viewing.

But I will share these non-spoiler highlights for the remainder of the film:

Somebody jumps out of a window but manages to survive due to a helpful awning and a disregard for the laws of both gravity and velocity.

Somebody utters the phrase “Let the Americans do their dirty work”.

Two people make love in the glow of a radium clock whilst a nearby Geiger counter is sending a staticky signal that maybe they should find another place to bump uglies.

A telephoto lens gets shoved up the carcass of the biggest chicken I have ever seen. (I may not be able to sleep tonight.)

Someone utters the phrase: “The small thin ones that slide out”. (Ditto.)

There is an artfully-staged death involving billowing couture.

John Forsythe is forced to deal with an unexpected tray of ice cubes.

All in all, this is a moderate Hitchcock film. The story is intriguing, to an extent, and there are some interesting ideas from a film-making perspective. But the movie suffers from Hitch re-using some of his trademark techniques that had grown stale by this point, and the best sequences feel like safety-net borrows from directors who did it better.