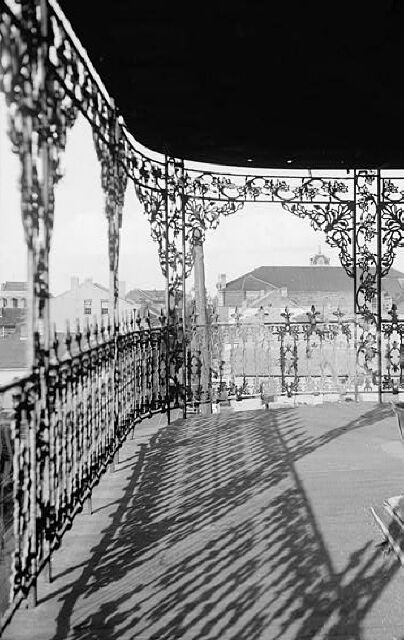 Ah, New Orleans. As this photo shows, the city is filled with many examples of lavish, exquisite architecture in the most unexpected places. Who wouldn’t enjoy walking out onto what, in other cities, would simply be a mundane, unexceptional balcony on a modest townhome, and instead finding this treasure of extravagance. Unfortunately, since this is New Orleans, this is also what many victims of Voodoo Queen Marie Laveau reviewed before a summoned demon threw their asses onto the quaint cobblestones below. You win some, you lose some, but the city still offers the best fried-oyster po’boys that you can find…

Marie, taping me on the shoulder: “Excuse me.”

Me: “How the hell did you get past my security?”

Marie: “Your security? Child, surely you don’t mean that mangy cat named Scotch who hissed at me when I opened your front door with my mind.”

Marie, waving a hand: “Honey, that cat don’t have nothin’ on me. I took care a him. Looks like you tried to take care a him before, cause he ain’t got no balls, but that’s why he hissin’. He don’t forget.”

Me: “Took care of him? Are you saying that you…”

Marie: “Naw, I didn’t put him down. I just put a curse on him, made him go in another room and think about gettin’ revenge for the berry pluckin’. Tit for tat, Momma always said.”

Me: “I don’t understand what you’re saying.”

Marie: “Course not. You a white boy from Oklahoma. But you might wanna keep one eye open tonight.”

Me: “I don’t really care for what you’re trying to imply about my background.”

Marie: “Welcome to the club. And I don’t really care for this little story you writin’. I’m a Voodoo Queen. And you makin’ fun of voodoo queens. Do you understand what voodoo means?”

Marie: “No you don’t. You shouldn’t piss off a voodoo queen. Just look at Sarah Huckabee Sanders. She mad.”

Me: “Well, you’re supposed to be dead, so I didn’t think it would matter.”

Marie: “Voodoo queens never really die. Just look at Theresa May. And why you havin’ me talkin’ all ghetto and shifty? You ain’t doin’ that with your other characters.”

Me: “Actually, if you’d bother to read some of my posts instead of just clicking ‘like’ and then moving on to the next-”

Marie: “I do read your posts. Ain’t nobody got an accent. Except you, Oklahoma Boy. You done ripped the twang out a your hick-ass words, soundin’ like you from England. Ain’t nobody buyin’ that mess, clodhopper. You all full a pretense and misdirection, just like the Fox News and the NRA.”

Me: “Look, it’s 12:52am and I’m past the point where I normally make a new post. 73 percent of the people who started reading this bit have stopped reading and gone on to greater things. How can we wrap this up so I don’t look like a racist and you don’t look like someone who is pointing fingers at other people instead of accepting responsibility for their own actions. Just like Donald Trump.”

Me: “But I spent a lot of time getting us to this point and-”

Ah, New Orleans. As this photo shows, the city is filled with many examples of unexpected treasures, if only you take the time to get beyond the preconceptions and embrace diversity. Just like it should be everywhere in America, regardless of the accent. And if someone doesn’t want to love thy neighbor, well, we’ll just have to do some berry pluckin’ and vote those clodhoppers out of office…

Originally published in “Crusty Pie” on 05/16/15. Considerably revised and extended for this post. And for the record, I never had an Oklahoma accent. I always had a Brian accent, much to the chagrin of those who done tried to raise me…