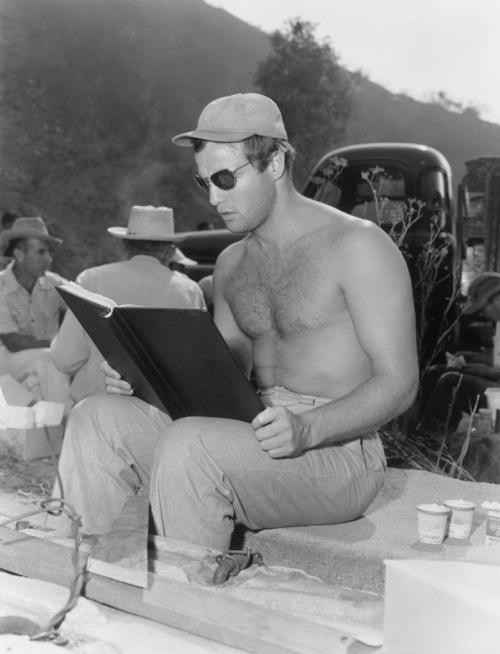 Director: “Has anybody seen Marlon? I need him on the set.”

Bitter Scriptwriter: “Why does he have to be here? My words are superb. Anybody could do this scene, assuming that they can read.”

Not-bitter Production Assistant who still believed that she could bed The Brando given the right opportunity: “Now, let’s not be so truculent, Oscar Wilde. Maybe Marlon is still caught up in that traffic jam at the craft services table, where everyone was stunned to discover the shocking lack of caviar.”

Enrique de Enrique, Make-Up Artiste Extraordinaire, at least in his own mind: “Well, I know Mar-Mar is ready to go. I personally arranged all of his chest hairs in a pattern that should appeal to our target demographic. It’s some of my best work.”

Greer Garson, co-star: “I heard him say he needed to get something posted.”

Production Assistant, eyes aglow: “Did he mention any names?”

Producer, arriving on set for his one and only token appearance because he really didn’t know anything about making movies even though that was his job: “Where’s Marlon? They told me he would be here so he could kiss my ass. I’m not going to be happy if we don’t have any insincere worship.”

Director, fully aware that his career longevity was dependent on people who didn’t deserve any longevity whatsoever: “He’s on his way. I’m sure he’s just getting into character to make sure this scene is perfect.”

Producer: “I don’t care if it’s perfect. I just want it done. I get my bonuses for meeting deadlines, not for quality. That’s the American way. Somebody better find me some Marlon before I shut this thing down and greenlight that movie about dancing Puerto Ricans in New York City.”

Director, ruing the day he thought he could make a difference: “Understood. Nancy, could you bring Marlon to the set?”

There was no immediate response from anyone in this tableau of dysfunction.

Director, turning to the Production Assistant: “Are you not listening? Was the wetness behind your ears causing a hearing issue?”

Production Assistant: “I heard you, but my name is not Nancy. It’s Salome. You weren’t even close. How, exactly, did you expect me to make a connection?’’

Director: “I think the connection is that you want to keep getting a paycheck, correct? Now go reel in the Marlon. Do whatever it takes to get him here.”

Salome: “Got it.” She raced off, managing to toss aside her panties without impeding her swiftness in any way, encouraged by the “whatever it takes” philosophy of the director, which happened to coincide with the goals she had outlined in her diary last night. There is no shame in Hollywood, only box-office tallies.

Enrique de Enrique, perturbed by the panty-tossing and concerned that his own lusty diary might be overruled, decided to join the quest. “I’ll just go help her out. She might need some backup.” No one noticed that he snatched up an assault weapon from the craft services table sponsored by the NRA, because many people in America like to look the other way when it comes to the true foundation of a problem.

Meanwhile, off in an obscure backlot of the studio that hadn’t been utilized since the invention of sound, Marlon was checking his statistics. “Damn it. I don’t understand why my latest blog post isn’t getting any hits. What the hell do I have to do to get any traction in self-publishing?”

Brian, the real scriptwriter: “Oh, honey, let me tell you a story. But keep your shirt off while I tell it…”

Originally published in “Crusty Pie” on 03/16/18. No changes made. Side note: I just now noticed the three little cups sitting next to Marlon. What the hell is that all about, and how did I miss it? Sometimes I’m not the sharpest tool in the shed. But at least I have a new update angle when I eventually repost this, because you know I will. On second thought, maybe I can do the update now…

Salome, racing up to Marlon with an admirable degree of velocity, a side effect of her enhanced aerodynamics due to the streamlining of her panty-tossing: “Mr. Brando, the director wants you on the set. What can I do to help you get there? Before you decide, I should point out that I don’t have a no-nudity clause in my contract. And I’m not afraid of butter.”

Marlon: “How interesting. Well, I’m in a bit of zen mood right now, so we’ll let the pharmacy decide. Do you want the red pill or the blue pill?”

Salome: “But there are three cups beside you.”

Marlon: “The third cup is for the urine specimen you’ll have to provide after having taken one of the pills.”

Salome: “This is not where I expected the story to go.”

Marlon: “Nor did anyone who is still reading this. It’s what happens when the writer doesn’t know when to let things go.”

Originally published in… oh wait, I already did this part. Actually, I’m just creating another footnote so I can announce that anyone who gets the butter reference scores additional bonus points. Cheers.