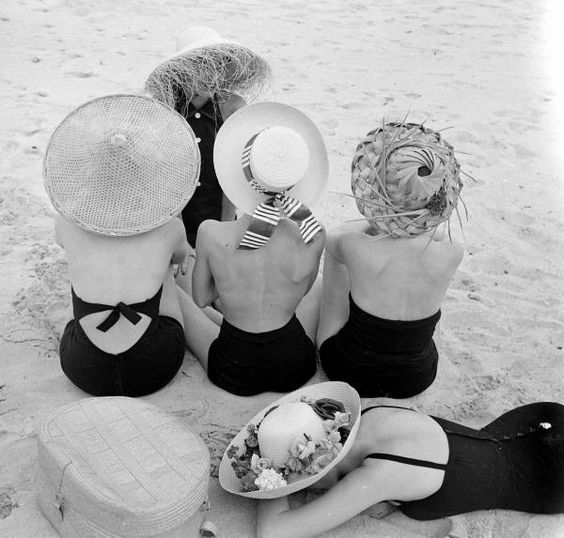 Lady on the Left: “I don’t think I’m adequately prepared for what is about to happen in this short story.”

Lady in the Middle: “You’re going to go there already? Give the writer a chance. He’s just trying to make a living like all the rest of us.”

Lady on the Right: “Oh, please. Like any of us have actual jobs. We’re sitting on a beach in the middle of the day and we have absolutely no responsibilities whatsoever. We don’t know hardship from a hole in the sand.”

Left Lady: “I don’t really appreciate you discounting my opinion. Just because I have never contributed anything to society, it doesn’t mean that I can’t call it like it is. The writer is making up random dialogue that none of us would every actually say, all in the hopes of coming up with something clever so people he doesn’t really know will click ‘like’ on this post.”

Middle Lady: “You’re just bitter because your hat is clearly the ugliest of the three. There’s no need for you to get vindictive towards others instead of accepting the fact that you’ve made some poor life choices.”

Right Lady: “Wait, let’s not base this all on hat selection. I might have erred myself. Every time the wind blows, the propellers on my noggin kick into gear and I end up on the next beach and my drink gets spilled.”

Left Lady: “That’s exactly what I mean. The writer is obviously making crap up until he can sledge-hammer the dialogue toward a point that he doesn’t yet have.”

Middle Lady: “Have you never read this blog before?”

Right Lady: “Have you never listened to a politician make a speech?”

Lady in front of The Three who looks like she might be channeling Katharine Hepburn in The African Queen: “What is wrong with you people? Have you seriously not noticed the woman behind you who is in desperate need of medical attention?”

Left Lady: “I didn’t tell her to drink all that tequila. She should have made better choices.”

Middle Lady: “It just now occurred to me that none of us are wearing outfits that could possibly cover our breasts, so I’m at a loss as to what I should or should not be doing and I’m going to pretend that other people are responsible for where I am now.”

Right Lady: “All I know is that she’s blocking some of the wind and I haven’t been airborne since she passed out behind us. I’ve always depended on taking advantage of the unfortunate in order to further my own agenda.”

Seagull flying overhead: “And that, boys and girls, is how idiots you never thought could get elected somehow get elected. People don’t pay attention to what other people are doing. The mismanagement of boobs can lead to social anarchy faster than I can snatch some of the food out of the drunk lady’s hat.”

Originally published in “Crusty Pie” on 04/03/17. Slight changes made, although I purposely did not address the unknown hat-bearer in the extreme lower left. This will allow you to make the story your own, should you feel the need to insert additional dialogue. And for the record, that’s not me in the food hat. Although I do have one that I wear on special occasions…