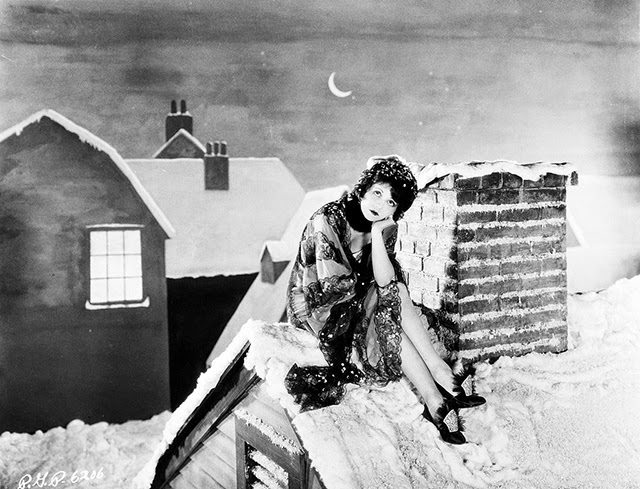 Clara’s Diary: “December 24th, late. So I met this guy. I was at a bar in West Hollywood, that part of town where all the set decorators live. I really only went in there because I really needed to pee. We’d been to the Cocoanut Grove earlier, and you know how insane the lines are for the ladies’ room, what with Mary Pickford still trying to be somebody, quoting Shakespeare to get attention, and Joan Crawford trying to sleep with everybody. It was tedious. So I crossed my legs and we left.

Well, my chauffeur, Bruce, made an odd sound while we were driving past this place called “The Wet Spot”, so I told him to pull over, because that seemed like a place where you could pee in a pinch. And so we did. I only meant to be in there for a minute, for a squat and a wipe, but as I stumbled out of the powder room (a fabulous powder room, by the way, I can understand why the set decorators might relish this zip code) I bumped against a man with a snowy white beard and a twinkle in his eye. I’m a bit frazzled, but our conversation went something like this:

Beard: “You are enchanting.”

Beard: “Au contraire. You light up the room. What do you say we blow this joint and take a ride somewhere?”

Well, part 2, I was greatly intrigued by his offer. He spoke French! So many men in this industry have trouble with English, never mind a foreign language. (Well, except for Maurice Chevalier. But I don’t trust him. His name sounds like a car that I can no longer afford, what with the talkies being invented.) Anyway, I decided to take a chance and I allowed him to lead me outside.

And there was this sled thing, attached to these odd animals. One of them had a red nose.

That should have been my warning sign, but I’d had a few Cocoanut Grove Slam-Bangers, courtesy of some fellow that claimed to be a casting director at Paramount. (Everyone claims to be a casting director during happy hour, have you noticed, dear diary?) So I ignored my natural instincts and allowed this man to bundle me into his primitive chariot. Next thing I know, we are flying through the air.

I really wasn’t expecting that part.

A bit later, we landed on the roof of this house. My first thought, of course, was that it was going to be really hard to find a valet who would park his vehicle, landing as we did at such a high elevation and all. Then I noticed that no one from the press appeared to be around, which just wouldn’t do. Why bother doing something if no one is going to write about you doing it? Something was amiss. I turned to my companion. “Twinkle Eyes?”

Moi: “What exactly is it that you do for a living? Are we doing it now?”

Twinkle: “We are, indeed. How perceptive of you. I knew you were special when I read your wish list.”

Twinkle: “But of course you do. Everyone does. Whether on paper or in their heads or in their hearts. And I see them all. Will you excuse me for one moment? I’ll be right back.” And with that, Twinkle snatched a tricycle and a baby doll out of an enormous sack that I hadn’t noticed, and then he plunged into the chimney.

Well, that was rather odd behavior, even for Hollywood. So I’m in a quandary, dear diary, as I sit in the snow on top of a rather mundane house presumably in West Hollywood. (Wait a minute. It never snows in Hollywood. How fast does this sled move?) Should I just sit and wait for the possible man of my dreams to pop back out of the chimney and explain his behavior? Or should I blame the 13 Slam-Bangers I guzzled that led to me making a misguided transportation decision and just get the hell out of here? Sigh. The dating scene just hasn’t been the same since some fool decided to include dialogue in the script.

Then I heard a bit of activity in the house below, and the excited voice of a young child rang out: “Oh, thank you, thank you! I’ve never had a brand new baby doll of my own!”

Well, then. That’s a point in Twinkle’s favor. There’s more going on here than I realize. Perhaps I should sit a spell and learn more. I’m glad I brought you along, dear diary, to keep me company. And I’m certainly glad that I took care of my business at The Wet Spot. Otherwise, the sound of melting ice dripping off this roof would drive me insane…

Originally published in “Crusty Pie” on 05/20/15 and Bonnywood Manor on 08/14/15, 12/26/16 and 12/29/17. Clearly, I am milking this cow far more than a cow should be milked. But since we’re doing a retrospective of past Yuletide Posts (okay, I’M doing a retrospective, the rest of you have to hang on for the ride), I had to include this bit as it’s one of my favorites. No changes made from the last revision because, as one of my sage friends recently mentioned to me, sometimes it’s best just to let the words be, no matter how hard I have to fight the inclination…