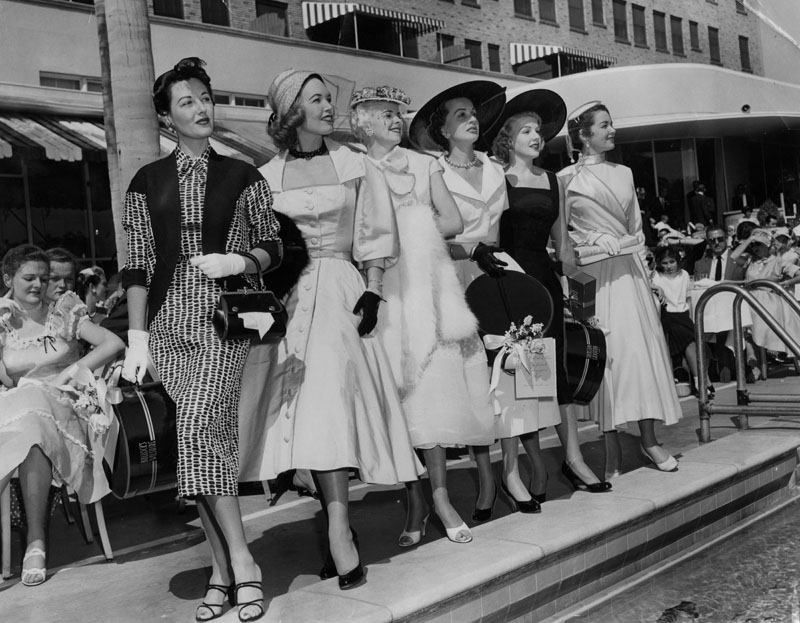 Left to right, Model #1: “Damn those prop people backstage. They gave me the one handbag that had an unpaid bill hanging out of it. Just my luck. Hopefully, the annoying print on my dress will draw the focus. And this hairdo. What’s up with that afro-puff on my forehead?”

Model #2: “Girl, don’t get my started on hairdo and props. I look like Heidi searching the Alps for her first orgasm. And these black gloves? Have I been coal-mining in Kentucky? And all the buttons on this dress? Even if I wanted to have sex with one of the creepy talent scouts around here it would take me thirty minutes to get into the launch position.”

Model #3: “Both of you young hussies need to shut the hell up. I’ve been modeling for sixty years. Try doing the runway in Paris wearing a hoop skirt. It was like dragging around the framework for the Hindenburg.”

Model #4: “Don’t cry for me, Argentina. But it would be swell if you could do something with this hatbox. There’s simply no reason for me to be carrying one alongside a pool in Beverly Hills.”

Model #5: “Oh, it’s not just the hatbox, honey. They shoved one at me, too. We all look like we’re sporting swimwear designed by Bess Truman.  And they made me wear the black outfit, so I’ll be the first one killed by Robert Mitchum in a film noir and I won’t be in the sequel. But what really pisses me of is that wretched wench Norma Jean coming up with the name ‘Marilyn Monroe’ before I did.”

Model #6: “Thank you for flying on the Starship Enterprise. Will you be having the dried fish or the dried chicken?”

Audience member on the far left: “Girl, did it ever cross your mind to exfoliate those heels?  I could grate cheese on that mess.”

Previously posted in “Crusty Pie” and “Bonnywood Manor”. No changes made. Personal side note to Lynette: Yes, I did see it, and I’m working on a worthy response. Stay tuned!