Pablo de Pato stepped out of his mountainside enclave and gasped.

Far down the slope, in the Villa at the edge of his kingdom, he could detect movement. People movement. How could this be? After the Great Insurrection of 2018, wherein Pablo’s warriors had soundly trounced the invading foreigners from England and America, he had felt quite certain they would never dare show their treasonous faces again.

But there they were, splashing about in the gleaming pool of the Villa, guzzling festively-colored beverages, and listening to offensive tribal rhythms from that pagan goddess, Madonna. This was an outrage.

“Ducky Bob,” hollered Pablo, “report to me at once!”

“Sir, I’m right here,” responded Ducky Bob. “Standing five paces behind you, as ordered to always do so.”

“Oh, right. We must begin battle preparations immediately. The infidels have returned!”

“By infidels, do you mean the folks renting the Villa for two weeks of vacation and hedonistic pleasure? Because, if so, you might not have a firm grasp of the word ‘infidel’. Perhaps you wish me to research a more appropriate derogatory term.”

Pablo grimaced. “Ducky, we have discussed this. I am the commanding officer and you are not. You are here to do my bidding without question. Just like members of the Trump Administration.”

Ducky Bob sighed, weary of Pablo’s obsession with delusion and the Orange Menace, which  were essentially interchangeable concepts. “Look, I’m only banging around on this mountain with you because of a gambling debt. The military drag was fun for a bit, but we’re no longer drinking and I just want to get this over with. What do you want to do about the infidels?”

“We didn’t conquer them. The two-week rental was up and they had to get on a plane. That’s the only reason they left.”

Pablo bristled. “You speak of blaspheme!”

“No, I speak of what happens when people use Expedia. You really need to get off this mountain more or drink less. In any case, let’s keep working off my debt so I can return to my village in the other valley, where nothing important happens but at least you aren’t there.”

Pablo whipped out his binoculars and briefly studied the lower Villa, with the splashing and the Madonna, then lowered the device. “I’m not completely certain these are the same infidels, but if they are, and we did not actually vanquish them during last year’s campaign as you say, we must try new tactical maneuvers. We must get closer so we can better study them without them noticing we have discovered their intrusion.”

“So, a bit of clandestine espionage, then.”

“No, that sounds complicated. Let’s just hide in the nearby trees and spy on them. I know just the spot. We will blend in perfectly and they won’t notice a thing.”

Ducky Bob held out a wing. “Lead the way.”

Ducky Bob: “Are you sure this is working? I think they might be on to us, especially that one human who is on his phone and pointing at this lemon tree.”

Pablo: “Don’t be ridiculous. They can’t possibly spot us from here.” 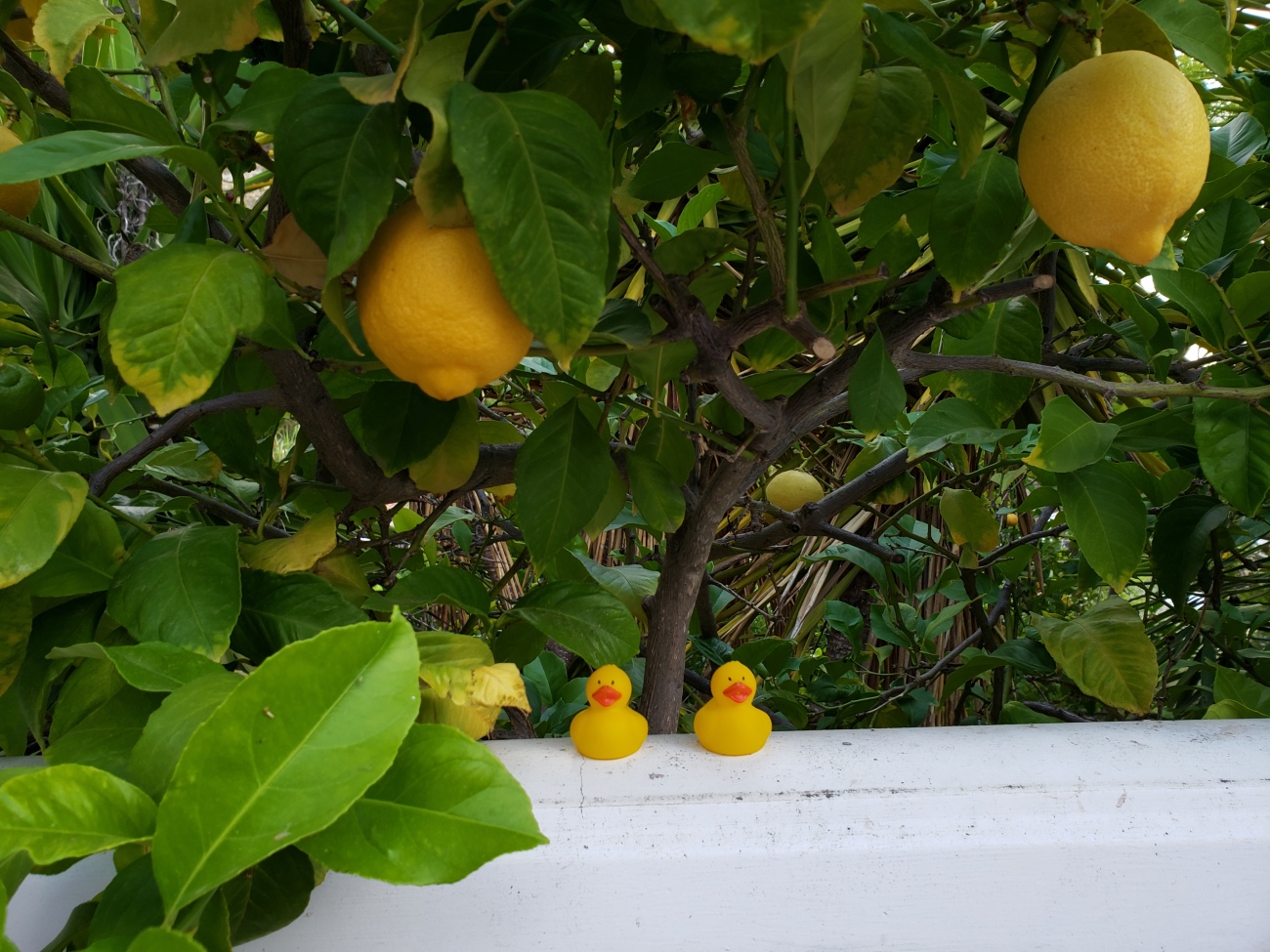