10 Reasons Why I Shouldn’t Go Grocery Shopping without Supervision 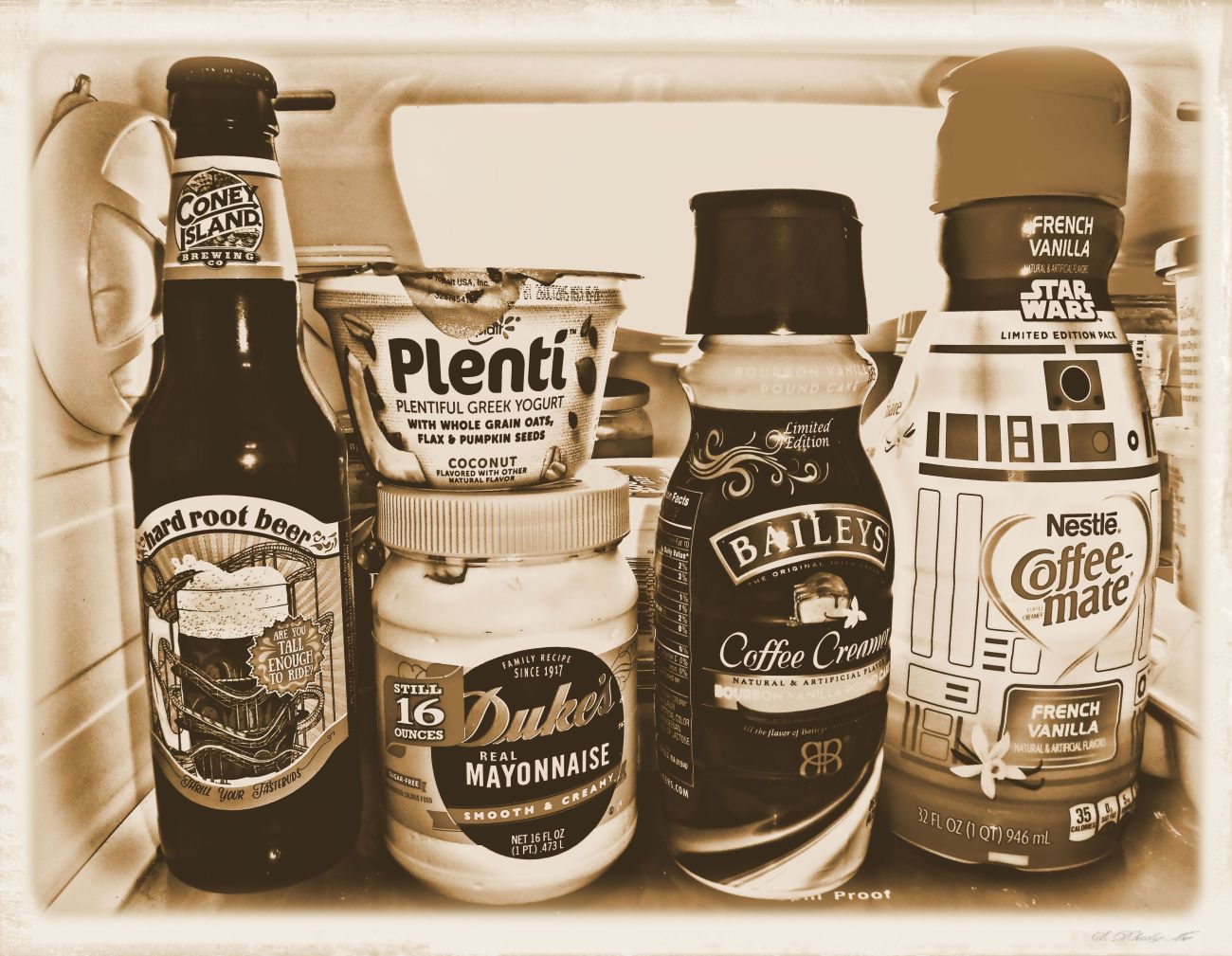 The uncontrolled behavior starts before I even get in the store. I’m one of those who doesn’t like to park anywhere near the entrances to a retail establishment, because some drivers are incredibly stupid and inconsiderate and I don’t want them maneuvering a vehicle into the slot next to mine. (I happen to prefer that my own car not have dings, dents, hanging bumpers, and paint scrapes that were not part of the factory finish.) So I park in Brazil, and then I walk.

Trouble is, this lengthy hike (I make sure I have plenty of water and a snack or two) means that I now have to walk past all of the people I was trying to avoid. People backing up without looking, idiots trying to turn into a slot while you’re still strolling past it, random children who have been psychologically destroyed by the non-purchase of a toy, and cretins who think belching and grabbing at their junk at the same time is some type of art form.  By the time I actually get to the store door, I’ve got a negative attitude because I’m already tired and our society is clearly doomed.

Some folks just have an eye for spotting a properly-functioning merchandise conveyance. They waltz up to the shopping-cart petting zoo at the front of the store, not even hesitating as they make their decision, and then manage to choose a cart that will function beautifully for the next two hours, never once making the tiniest squeak or doing that annoying thing where some of the wheels lock up like you just ran over an armadillo and then those wheels don’t roll right ever again.

Me? I can’t even get the carts to separate. My first choice is always the one that has somehow become welded-for-life to the spooning partner behind it. I can jerk and rip and tear but the carts refuse to stop copulating. The same thing happens with the next several random picks. By the time I finally get one of the carts free, I’m sweating and cussing and slightly foaming at the mouth, causing small children to tug on their mommy’s skirt and promise to be good the rest of their lives if they can just be taken away from this place with the scary man.

And, naturally, the cart I finally liberate is one that has had a hard life of drug and alcohol abuse. Only one of the four wheels even tries to work, with the other three digging in their heels or stubbornly trying to head in a direction that does not appeal to me in the least. It’s like trying to push a Buick across the bottom of the ocean. And the noise all of this makes? First-responders often show up and hand out evacuation guidelines.

3. I can’t get from Point A to Point B and then calmly find a check-out station.

Nope. I end up running all wild-eyed from one end of the store to the other, 400 times. To be fair, I always have the best intentions of following a plan (non-perishables first, refrigerated next, frozen after that, and alcohol as a reward at the end), but I rarely stick to it. I just somehow lose my focus and my sense of logic, and I often have to make repeat trips to the exact same part of the same aisle. (Because grabbing both peas AND corn during the same pass makes entirely too much sense, right?)

This is one of those spots where I completely lose my mind. I’m not even supposed to be eating this stuff, cholesterol issues and all, but before I even realize what I’m doing I have all manner of shredded, sliced, cubed, bricked and processed cheese piled into my cart. I always get too much. We won’t even be able to eat half of it before it expires, and cheese doesn’t expire for a really long time. It’s not like some of the other emotionally-weak dairy products that can expire before you pull into your driveway. (On the flip side of the dairy-longevity spectrum, although I don’t think it’s really dairy, is that odd soy milk stuff. We drink it and all, I actually like the taste, but have you ever taken a gander at the expiration dates? I have mortgages that will be paid off before a half-gallon of that mess will actually turn. What’s going on there?)

5. I am the one that irritates you in the frozen food section.

Full confession: I hold the doors open too long until everything fogs up and you can’t see anything inside the units, which makes people frustrated and bitter and not apt to speak kindly of you. I can’t help it. See, I eat a lot of those low-fat, low-cal diet things. (More of that high-cholesterol issue, and my weight issue, and the general issue of not wanting to go into cardiac arrest as I reach for another triple burger with a side of lard fries at a drive-thru mega-chain.) I realize the healthiest thing is to simply prepare my own meals using fresh and organic produce, exercise daily, practice yoga, avoid additives and donate to the World Wildlife Federation, but let’s get real. Who has time for that?

So I eat frozen things that have been sucked dry of all possible fat and any possible chance of being celebrated for the exquisiteness of the cuisine. But since I have to make the best of it, I try to pick out entrees with the most promise for actual flavor. Which means I stand there with the door open, pondering, inadvertently creating the ghostly, irritating frost layer that drives other people crazy as I try to decide between the Garlic Chicken Surprise and the Fiesta Fish Frenzy. Mea culpa.

I love potato chips. Worship them. But they don’t love me. I can just glance at a bag and I gain two inches around my waist as punishment for the glancing. So again, I try to be good by forcing myself to select something that has been “baked” instead of “fried”. (Translation: “tastes like cardboard” instead of “holy cow, I just had a salt-laced orgasm”.)

But it appears that the “baked chip” people are very busy, always coming up with new flavors that sound very promising. So I buy everything that comes along, desperate and hoping. But it rarely works out, and after I try one chip the bag is shoved into the back of the pantry for all eternity. Just the other day I found a parcel of “Uncle Granny’s Zesty Sea-Salt Tidbits of Nothing” in a dark corner of that pantry. It had an expiration date in 1987.

7. The weird aisle that combines cleaning products and scented candles.

I suppose there’s a reason why all of these things are lumped together, but apparently my attempts at higher education have not given me the proper deductive skills. Perhaps it has something to do with the Retail Gods realizing that certain Americans are completely uninterested in proper house-cleaning, so they might as well offer you Plan B, which consists of an array of overpowering candles that can mask your domestic ineptitude.

And thusly, the came up with those “air-freshener” candles that are supposed to detoxify your house, eliminate stanky odors, and convince you that your home has become magically located in a Tahitian paradise.  (And possibly increase your libido, based on the often-startling images of scantily-clad women succumbing to self-pleasure in a bathtub whilst accompanied by artfully arranged flower petals).

These candle-makers are just as busy as the chip people. There are at least three new scents every time you walk down that aisle. So I have to experience each and every one of them. (The fingernail on the index finger of my right hand actually has a callous from all the scratching and sniffing.) So of course I’m always buying more, despite the fact that we already have enough unburned candles in this house to light a medium-sized Catholic church for the next two hundred years.

Why pay less for a pre-packaged container of sandwich meat when you can pay even more for someone to physically slice the same exact meat on one of those blade-twirling machines and then lovingly place it in a special bag for you? Both versions of said meat have been sitting in the stockroom for the same amount of time. But I will happily pay ten bucks for three slices of designer pastrami that have been cut to my exact specifications, even when the rude little 12-year-old managing the hacksaw doesn’t listen to me and screws up the dimensions.

I have sinned. And I have sinned repeatedly. My craving for ice cream is why nuns were invented to beat people with rulers. Seriously.

10. My inability to be a patient human being in the check-out lanes.

You want to cut me off with your cart even though I saw the shorter line at Lane 12 before you did? Don’t think so. You want me to tolerate your screaming child who apparently cannot continue living unless you buy him a candy bar that will sugar-rush him to even greater heights of insubordination? Not gonna happen. You want to argue about getting to use a coupon that is not only expired but has nothing to do with anything that you are trying to purchase? I will pull out a machete and—

Oh, who am I kidding. I will just stand there and put up with it all and curse you under my breath. Because if I do something stupid and get my ass arrested due to your misunderstanding of acceptable human behavior, it’s just going to be that much longer before I can get back to my house where I can eat the taboo cheese, not eat the low-fat crap that I don’t want, suck down the ice cream using a shovel, and enjoy the aroma of yet another new candle, this one bearing the enticing name of “Shanghai Breeze and Pastrami on Rye”…

Previous footnote: Originally published in “The Sound and the Fury” and “Bonnywood Manor”, minimally revised for this post, mainly in the correction of a horrid “paragraph” that was actually one long sentence that was so grammatically offensive that my eighth-grade English teacher knocked on the front door twenty minutes after that post hit the airwaves. She had her ruler with her.

New, trivia-based footnote: The first time I shared this one on Bonnywood, it was my tenth fledgling post, many years ago, and I was still aglow with that starry-eyed belief that moving my blog from Blogger to WordPress would do great things for my literary career.

That tenth post only got TWO likes. Two. And I don’t think either of those two people are even on WordPress anymore.

But I stuck with it, and here I am now, lucky enough to have met some terrific people who have the patience and kindness to check in regularly and see what kind of messy soup I’m serving today. Even if I double-dip from the pot more often than I should.