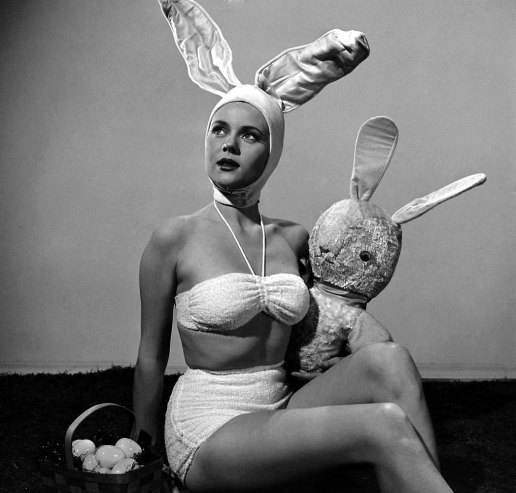 Peggy: “I’m so bored holding this position while they adjust the lighting.”

Bunny: “Well, I must say that I shouldn’t be bored, considering what’s right in front of me. But since I’m apparently missing one of my eyes, my depth perception is a bit off. Are you stacked or not?”

Peggy: “Really, Bunny! That’s inappropriate language to be coming from a prop.”

Bunny: “Sorry, doll. I don’t get out much. They keep me locked up in storage until somebody decides to make an Easter movie or some urchin in a war film needs something to clutch while they wait for daddy to come home on leave. Are you wearing terrycloth? Terrycloth really excites me.”

Peggy: “What in the world? I’ve never heard of such a thing.”

Bunny: “Terrycloth is soft like me. I think this means that we were meant to be together. At least for tonight.”

Peggy: “I think you need to make other arrangements on how you plan to spend your evening. I’m a married woman, after all.”

Bunny: “Married, eh? So that means the sex is pretty redundant by now. Are you sure you don’t want to do the bunny hop a time or two?”

Peggy: “Okay, this has gone far enough. Either you shut your mouth or I’m going to ask the prop master if he’s got a beach towel I can use instead.”

Bunny: “Oh, you don’t wanna hang around with the beach towel. He’s got the clap.”

Peggy: “You have got to be the rudest bunny I have ever-”

Photographer: “Is there a problem, Peggy? Who are you talking to?”

Peggy: “Oh… I was just… rehearsing my lines for an audition this afternoon.”

Photographer: “I see. Well, we should be ready to go in about a minute. Hang tight.”

Peggy, vehemently whispering: “If you say one more word I will rip your other eye off and not feel one bit bad about it.”

The photographer, returning to his equipment, also whispering: “Do you think we should tell her?”

Jenna, the Underpaid Assistant, because there always is one: “That she’s holding Donald Trump? Maybe afterwards. We’ve got a deadline.”

Photographer, whose name is Easel Adams, should such a thing interest you: “But I feel a little bad. He forced his way onto the set by once again abusing his powers of Executive Privilege. I know we should be used to his disregard for common decency by now, but it’s still not right.”

Jenna: “Oh, don’t worry about Peggy. She seems like someone who can put him in his place. And I think most of the world would agree that it would be perfect if it’s a woman who finally brings Trump down. Especially a woman with a tan.”

Previously published in “Crusty Pie” and “Bonnywood Manor”. Modified and extended for this post. No actual stuffed animals were harmed in the making of this episode. But at least I finally know what happened to my granny’s bedroom slippers. (Yes, that means you should scroll up to the picture again. See? Right there on Trump’s perception-challenged head.)