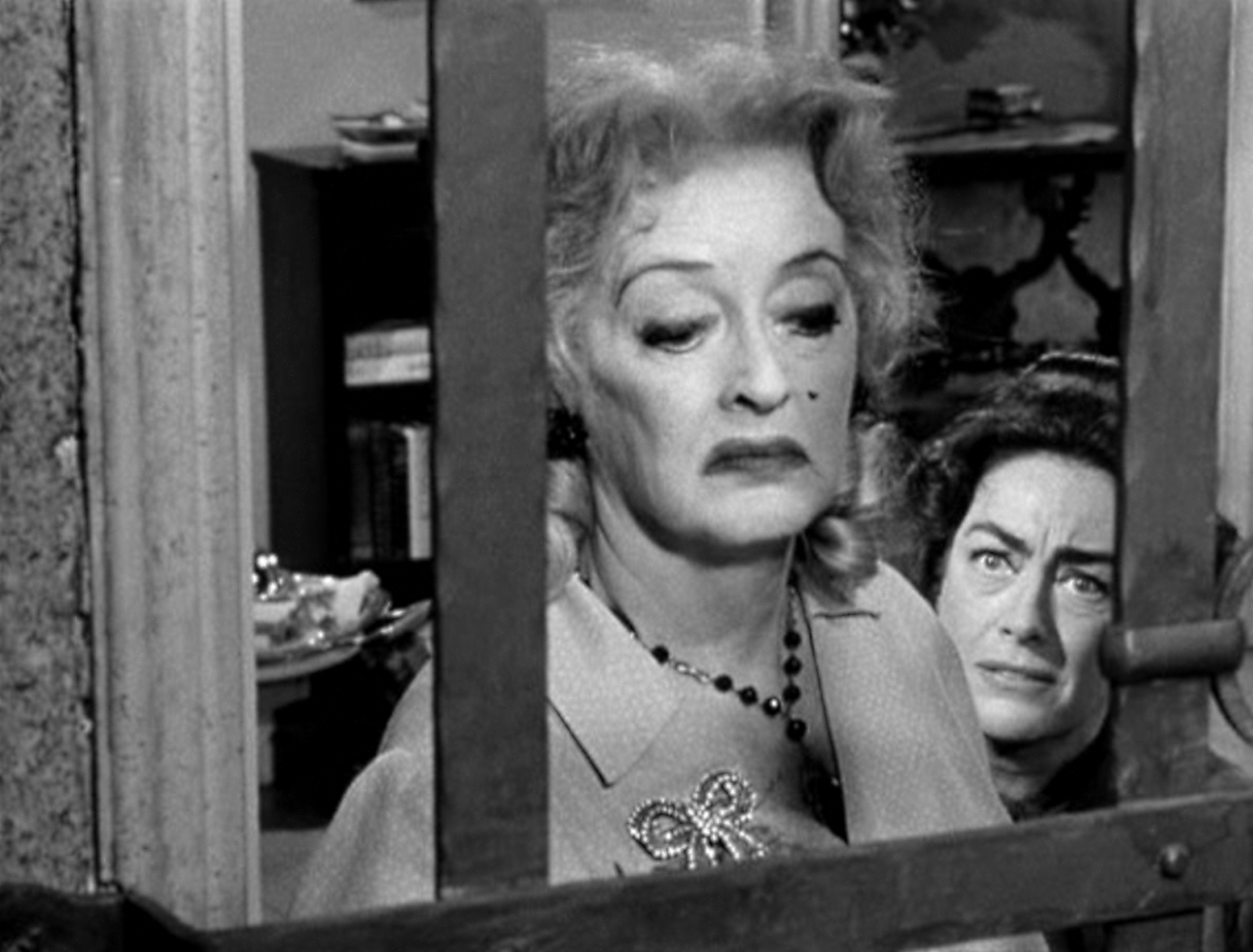 Bette Davis, left: “Hmm. Just as I suspected, the gardener did not trim the begonias as I instructed.”

Joan Crawford, right: “How on Earth can you be thinking about flowers at a time like this? You are keeping me prisoner in this house as we both struggle through a movie script that will hopefully resuscitate our careers.”

Bette: “Our careers? Oh, Joan, I didn’t take this part for a jump start. I took it because I wanted you to suffer.”

Joan: “Suffer? I’m already doing that by having to sit in a fake wheelchair next to you.”

Bette: “Good. Maybe next time you won’t be such a wretched tramp and sleep with my husband.”

Joan: “Your husband? Somebody married you?”

Bette: “Of course I’ve been married. Several times, actually. How do you think I got my children? I certainly didn’t order them on eBay like you did.”

Joan: “Don’t judge me for that, I simply took advantage of the free shipping. Besides, I never slept with your husband. Wait, what did he look like?”

Bette: “He had a penis. Isn’t that your only criteria?”

Joan: “Well, if vodka was involved, yes. But still, I didn’t sleep with every man I met. There simply isn’t time in the day.”

Bette: “Oh, I’m sure you didn’t. There must have been one or two who took one look at your eyebrows and escaped into the night.”

Joan: “My eyebrows? Mine are real. Yours were clearly created by a morphine addict who didn’t know what part of your body he was accenting.”

Director Robert Aldrich, wandering back from having also slept with one of Bette’s husbands: “Ladies, there appears to be a bit of dissension on the set. Do we need to take a break?”

Bette: “Of course not. I’m a professional. Unlike Va-Joan-a over there.”

Joan: “We’re both professionals, dearest Bob. Just at different things. Let’s get this done before her eyebrows drip off.”

Later that day, Joan’s daughter Christina Crawford made a wrong door selection whilst searching for the loo, and she found herself in what appeared to be a dusty, forgotten storage closet. She spied an ancient typewriter that smelled of vodka and regret.

Her eyes lit up. She’d always wanted to be a writer, but she had never settled on the exact story that she should tell. Then her eyes drifted to an abandoned wire hanger conveniently placed next to said typewriter by a stagehand who had slept with Joan during the filming of “Neurotic Vixen in Heat”. Said stagehand was unable to fully appreciate the climax of the film, so to speak, due to Joan insisting on taking a phone call from her agent during the roundelay, and he had been bitter ever since.

Christina’s eyes lit up even further. Perhaps she did have a story, after all. She ripped the cracked plastic cover off the typewriter and got to work…