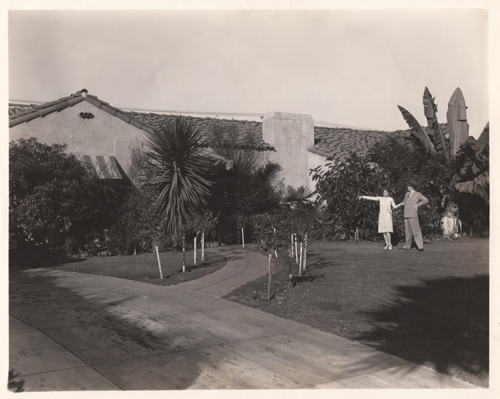 Clara Bow, left: “See, the door is right there. So, I don’t understand why people didn’t show up for my party. That’s why I called you out here, to figure out who did what to ruin my night. Mary Pickford is probably involved, since I’m cuter than she is, so you should put her at the top of the suspect list.”

Detective: “Well, I’m not really seeing a door, so maybe your invited guests didn’t either. And then they just went back home, since they know where the doors are there.”

Clara: “Oh, don’t be so simple. I designed the entrance to be just like trying to achieve success in Hollywood. You don’t know where to go or what to do but if you want it bad enough you will hack your way through the jungle and make people pay attention to you. It’s really rather clever and I should have won an award of some kind. I already wrote an acceptance speech and everything.”

Detective: “Hmm. That does sound rather imaginative and possibly absinthe-inspired.  But while I really appreciate the hefty fee you are paying me because you have more money than you know what to do with, I have to say that there might be better ways to spend your petty cash. And maybe you should ignore the voices in your head.”

Clara: “Are you making fun of me?”

Detective: “No, I’m making fun of your decisions. There’s a big difference. We can still go to the same parties and no one will know that we’ve had this awkward moment.”

Clara: “Oh, I couldn’t possibly go to a party and pretend to be friends with the help. It just wouldn’t do.”

Detective: “Really? You’re going there? Okay, fine. I think we’re done here. I’ll send you the bill for this insipid lark and hope that the mailman can figure out where your damn door is. But can I offer some final advice?”

Clara: “I suppose. I clearly don’t have anybody else to talk to, since the party was a bust.”

Previously published in “Crusty Pie” and “Bonnywood Manor”. Modified and extended for this post.

Lesser Frond: “Of course not. We all signed a non-disclosure agreement and you can’t back out now. Besides, do you really want to piss off the boss?”

Suddenly, the front door slams open and Clara fights her way through the foliage. “I’m hearing voices. Did someone finally arrive for my party?”

Crickets chirp. (Well, except for the one monk cricket who had taken a vow of silence.)

Clara sighs, then slams the door on her way back inside. She contemplates ordering Chinese, but then realizes that the delivery guy may never find her, so she pulls out a Ouija board and plots her revenge on an innocent Mary Pickford…