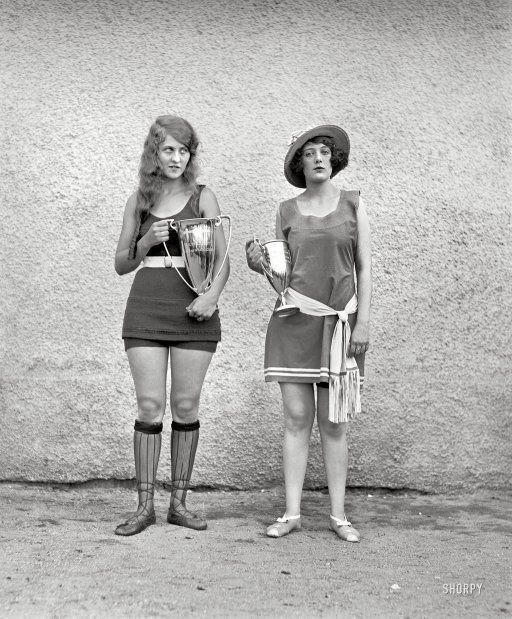 They showed up. They got their trophies. Discussion ensued.

Lurlene, left, lovingly: “These cups are so pretty, just like me. Aren’t you excited that we won?”

Raychelle, right, wretchedly: “It’s about as exciting as a bowel movement. We were both bound to have one today.”

Lurlene, peevishly: “Don’t be such a stick. I’m very happy about my prize.”

Raychelle, contradictorily: “But you didn’t do anything to deserve it.”

Lurlene, quizzically: “Whatever do you mean? I won the talent competition!”

Raychelle, exasperatedly: “We ALL won the talent competition. Even that poor girl who got her tongue caught in her ukulele and had to be carried to the medical tent.”

Lurlene, confusedly: “She did? What about that gal who belched the national anthem and clearly forgot half the words?”

Raychelle, emphatically: “Her, too. Everybody.”

Lurlene, suspiciously: “That can’t be right. You know, I really don’t care for it when you pretend that you know something that I don’t. You always were a bit of a bitch that way.”

Raychelle, frustratingly: “I’m not pretending to know. I do know. Didn’t you read your contract?”

Lurlene, sniffily: “I never read those things. That’s for my agent to do.”

Raychelle, dismissively: “You haven’t had an agent since you gave your last one that special rash. Bet he had fun explaining that mess to his wife.”

Lurlene, indignantly: “I can’t help it if some men are tender-headed, so to speak. But just in case I might be interested, what did the contract say?”

Raychelle, knowingly: “That everybody gets a trophy. Which is exactly what I’ve been trying to tell you. It’s how they do it these days. Ever since some delusional parents got their panties twisted over their bratty and insufferable children never winning anything because they are bratty and insufferable. And talentless.”

Lurlene, mortifyingly: “But that’s not fair! It’s a slap in the face to people who actually work really hard.”

Raychelle, noddingly: “I agree completely. I’m glad we finally reached this point, because I think we should make a political statement. You should give your trophy back as a protest.”

Lurlene, mis-understandingly: “Me? Why me? I earned my trophy fair and square.”

Raychelle, haughtily: “No you didn’t. You bought it when you paid the entrance fee.”

Lurlene, reactively: “Well, apparently you did, too. So why don’t you give yours back?”

Raychelle, incredulously: “Honey, I’m the most talented one in this whole production. I outperformed everybody without even breaking a sweat. I could have slept through the whole thing and still been more talented.”

Lurlene, bitingly: “See, there’s that bit of bitchy again. You weren’t any better than me.”

Raychelle, insistently: “That is a complete lie, you Rashy Woman. I seem to recall that your act involved the startling use of wine corks in some misguided tribute to the ping-pong ball scene in ‘The Adventures of Priscilla’. How you got that one past the Morality Board, I haven’t the faintest.”

Lurlene, proudly: “I’ll have you know that my family has been doing that act for generations. It’s a time-honored tradition.”

Raychelle, bitterly: “Oh really? Your anatomical outrage pales considerably compared to my own act. You did see it, didn’t you?”

Lurlene, admittedly: “Um, I didn’t quite catch it. I was busy signing an insurance waiver after one of my corks dinged a hot-dog vendor.”

Raychelle, self-aggrandizingly: “Well, let me break it down for you. I played a Beethoven concerto on the harpsichord whilst simultaneously juggling seven priceless vases from the Ming Dynasty with my hands and painting a perfect replica of the Mona Lisa with my left foot. And I assure you, nothing hit the ground that shouldn’t have.”

Lurlene, pensively: “Oh. Well, that does sound rather swell. Maybe we both earned these trophies, even if we paid for them.”

Suddenly, the co-director of the pageant came rushing up to the duo. “Hey, Ladies, I’m glad that I caught you before you went to the after-party at the Dairy Queen. Listen, we’ve got a pickle on our hands. It seems that Betty Jo in accounting didn’t account quite right and we’re one trophy short. That poor girl in the ukulele incident? She didn’t get one because we forgot about her in the medical tent until she briefly went into Code Blue and we had to amputate her tongue to save both her life and the ukulele.”

Lurlene, empathetically: “My heart goes out to her.”

Co-Director: “Yes, we’re all grieving and wringing our hands and crossing our fingers that there won’t be too many lawsuits. In order to cheer her up and possibly avoid litigation, we thought it best to find her a trophy pronto, since it’s her first pageant and all. And since the two of you have been doing the circuit for ages and have tons of trophies, perhaps I could convince one of you to give up your trophy so we can brighten the day of someone less fortunate.”

Lurlene, forcedly: “You’ll have to pry it from my cold, dead hands.”

Co-Director: “Oh. Okay. Well, have a nice day.” He raced off, hoping to catch the National Anthem Belcher before she wandered off the premises.

Raychelle, reflectively: “I suddenly feel a little not good about myself. As if there was something very important that I should have learned from this story, but I’m not quite grasping it.”

Lurlene, equitably: “I have that same feeling. I just counted my wine cork inventory, and even considering the one cork that was confiscated by the police after the hot-dog vendor hit the deck, I’m still missing two of them. Which means…”

Raychelle, astutely: “That I’d best not stand next to you at the after-party if I want to avoid a surprise concussion.”