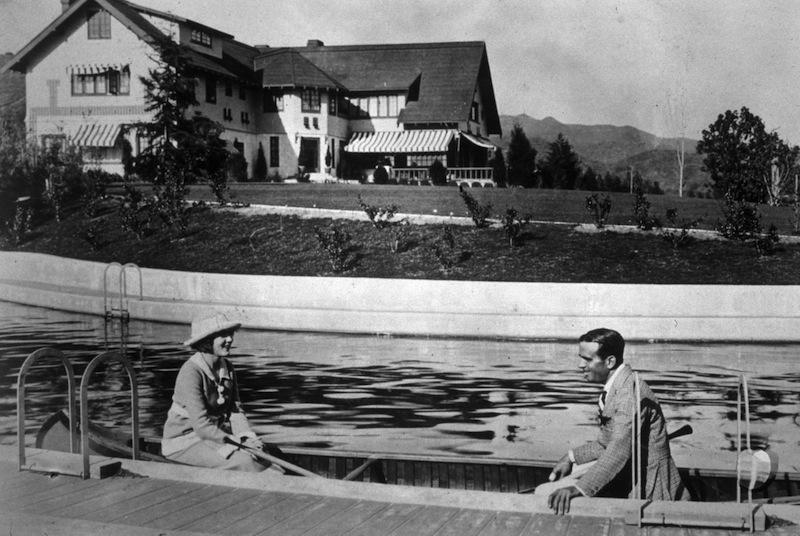 Mary Pickford, left: “What do you mean this doesn’t look realistic?”

Douglas Fairbanks, right: “We’re supposed to be looking like the typical American family so the people in Kansas will identify with us and go see our movies. How does any of this say any of that?”

Douglas: “Not in their church clothes. And they don’t go boating in what is obviously a big-ass swimming pool. And they don’t say words like ‘boating’. Rich people say that.”

Mary: “It looks like a river. They won’t know the difference.”

Douglas: “What river has ladders on the sides? Wait, have you ever even been to a river?”

Mary: “Of course not. There’s no on there to serve you cocktails.”

Douglas: “And do you think they are not going to notice that mansion right over there? What common person lives in a house that big?”

Mary: “Lots of people. Orphans. Nuns. Wealthy criminals in minimum-security prisons. You know, like that place they sent Theda Bara when she had too much bourbon and slapped the wrong people.”

Douglas: “This just doesn’t sit right with me. We should be doing what poor people do, to show that we understand them and we don’t feel like we’re above them socially.”

Mary: “But we are above them. We’re rich and they’re not.”

Douglas: “We’re rich because poor people go see our movies instead of paying their bills. And if they don’t keep doing that, we won’t be able to pay our bills.”

Mary: “Really? That sounds like a wretched arrangement. Is this how the French got rid of their kings and queens?”

Douglas: “How did you get there? The French got rid of royalty because Marie Antoinette had a misunderstanding about baked goods. But I suppose the bottom line is the same thing. We have to pretend, at least for a little while, that we are something we are not. America is all about delusion and misperception.”

Mary: “Well, I suppose you’re right. Should I ring for one of the maids and ask her how to look poor?”

Douglas: “Oh, that’s a good idea. But which maid? That upstairs maid is kind of uppity. I don’t really care for the way she arranges my pillows.”

Mary: “The downstairs maid, then? She doesn’t say much, just like we don’t in our movies.”

Douglas: “No, she testified against Theda Bara at her trial. She might not be over that just yet.”

Douglas: “What the hell is that?”

Mary: “Beats me. Something about washing dishes? Louella Parsons said I simply had to have one or she wouldn’t write about me in her movie column. So I had our house manager hire her. I’ve never officially met this woman, but I think she’s the one who giggles a lot when I inspect the wine cellar. And she’s from Guatemala! Everyone knows that people from north of the border are really poor.”

Douglas: “That sounds perfect. Bring her out here now.”

Mary: “Oh, no! I just dropped my servant bell and it’s now at the bottom of our swimming-pool river. How does one get servants to come to them without a bell?”

Douglas: “This is a terrible day. How can it get any worse?”

Photographer, exasperated and intruding: “Okay, folks, time for some action shots. Can you maybe actually row the boat?”

Douglas: “Could we call in the stunt doubles?”

Photographer: “No, and no. We need to get this done if you want your pampered faces to appear on the next cover of ‘Egotism Weekly’. We’re on a tight schedule.”

Mary: “You sound a bit surly. Did Theda slap you as well?”

Douglas: “We’re depending on you to capture us in all our glory.”

Photographer: “Oh, you can trust me to do what’s right. After all, I’m from France, and I know the difference between bread and cake. Say fromage!”

Previously published in “Crusty Pie” and “Bonnywood Manor”. Revised and extended for this post.