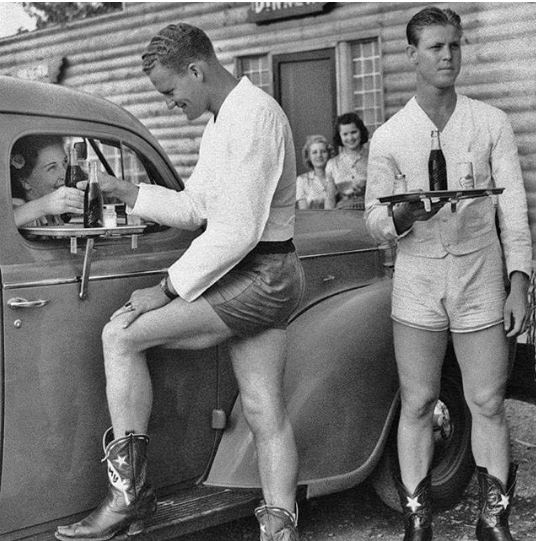 Once upon a time, there was a mild uprising in 1940s Dallas, wherein the womenfolk grew tired of the menfolk getting to have all the fun when they would visit a drive-up restaurant. It wasn’t fair that the men got to ogle scantily-clad female servers who would roller-skate up the cars, proffering a tray of edibles on their ample bosoms. Why couldn’t the women get some eye candy as well?

Sure, it was, as mentioned, the 1940s, and women were doomed to second-class status, a position they would hold until the Trump Administration demoted them to third-class. Equality was rarely something that was given any degree of consideration when it came to capitalism. Still, there was a market out there, if only it could be adequately plundered for profit, which is the American Way.

Cue the owner of the “Log Lodge Tavern” (a moniker that is rather eye-opening considering what followed), a man who ignored the pattern of male behavior at the time and actually listened to the women. He hired a bevy of bodacious college men to work as carhops at his drive-up establishment. Business boomed and the gambit was a terrific success. Well, mostly. There were also protests, because this took place in Texas, a land where much of the population is terrified of progress.

Interestingly enough, many of the protestors were women. Women who were perfectly fine with girls in hula skirts and coconut bras serving beer and bratwurst at nearby drive-ups, but they had an issue with men serving the same whilst sporting satin short-shorts and cowboy boots. This may be risky to say, but part of the problem with achieving equal parity in this country is that some of the disenfranchised buy into their own disenfranchisement.

Why, you may ask, am I including this bit of history in the Corona Chronology? Well, it’s because we’re on lockdown, and I’m unable to visit the Log Lodge Tavern. Granted, said tavern is long gone, but I did a bit of research and I know where it was located. (Right across from Love Field airport. You know, the place where JFK made his last landing as president.) In less-restricted times, I could at least park near the memory and envision a brief moment in history when innocence and titillation coalesced.

Because the boys in the photo are cute. (Those thigh muscles!)

I would have ordered every item on the menu, one thing at a time.

Then again, that’s how I approach all options in life. Savor each moment, and then refresh the page.

Note: Although this is an actual photo from the glory days of the Log Lodge Tavern, the ownership of the photo is in dispute, so I am unable to credit a proper source. This is what happens when one plunders the Internet incessantly in the wee hours of the morning.