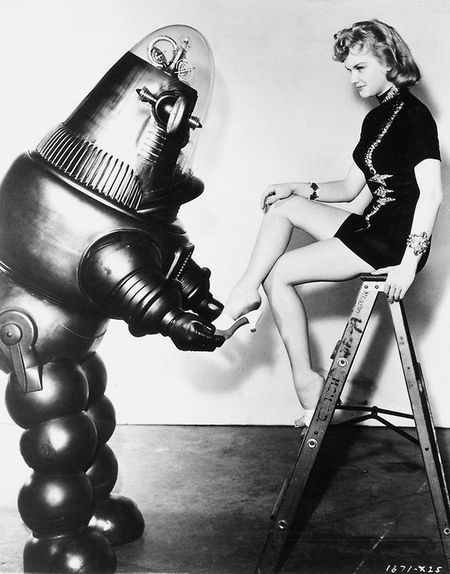 Anne hit the perfect-husband jackpot when she found a man who did what he was told, didn’t have to be fed, never argued, put her on a pedestal, and provided her with an endless supply of luxury footwear. Of course, procreation was going to prove interesting, and she would probably need a tetanus shot, but even the best relationships have their little challenges. Then, one day, Anne’s interstellar world was rocked.

Robby the Robot: “I believe I clearly stated that I have been giving shoes to other women.”

Anne: “How could you do such a thing? After all the things I haven’t done for you!”

Robby: “I assure you it was not a difficult task. I did exactly what I’m doing right now, slipping a high-end slipper to a woman who is mildly-aroused at such a proffering. Except it wasn’t you sitting on the ladder pedestal. And now that I mention it, perhaps you should run a sanitary wipe across the top of that ladder.”

Anne: “I can’t believe this! Just how many other women have you been sharing shoes with?”

Robby: “I’m still processing the data, but if I had to make a rough estimation, I believe the figure would be somewhere around 412.7 units.”

Robby: “No, it’s merely the result of my high-performance capabilities. I was designed to be productive and I am merely meeting the requirements of my service agreement. Don’t hate me for being bountiful.”

Anne: “But that’s all you do, right? Give them shoes? You don’t…. do any of these other women need a tetanus shot as well?”

Robby: “I cannot speak to their specific inoculation needs. I met most of them on strappy sandals dot com and we didn’t exactly share medical histories. But I can say that my specific grade of synthetic metal should not show up on their CAT scans.”

Anne: “Okay. So it’s just a foot fetish, then? It doesn’t go beyond that?”

Robby: “Regretfully, there is some degree of going beyond. After the sacred presentational ceremony, I often retire to the service closet and… recycle my oil.”

Robby: “No, I am not a god. If you wish for me to be one, you’ll have to order the upgrade software from Macrohard Industries. I understand they are running a special at the moment, so if you call now you’ll get free shipping and a bonus program that will allow me to walk on water.”

Previously published as “Past Imperfect – #107”. Slight changes made for this post. I pulled this one out of the archives after being triggered by a clever piece that Rivergirl shared at River’s World. She is completely innocent in the matter, so don’t judge her harshly for any malfeasance on my part (such as the “recycling” bit), but do visit her blog, if you get the chance. She’s great fun.