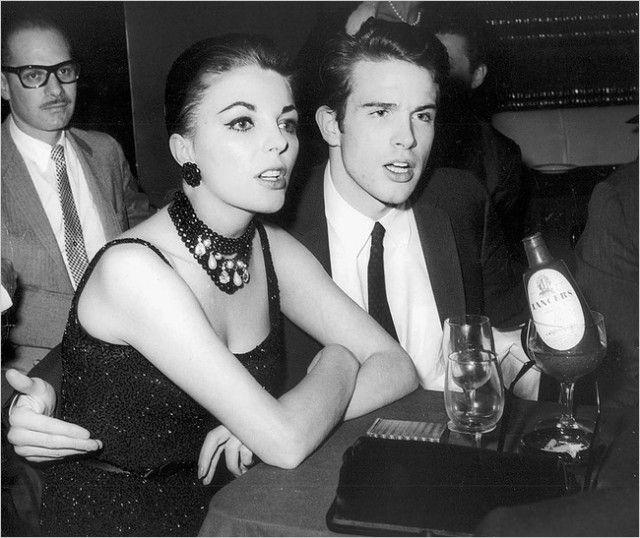 Note: This one is SO not right on many levels, and a bit naughty. Fair warning.

Joan Collins and Warren Beatty gaze in wonder as Warren’s sister, Shirley MacLaine, does an interpretive dance on the stage of the Lido in Paris, wherein Shirley warns of the dangers of sleeping with everyone else on the planet just because you can. Joan at least appears to be showing interest, although she seems rather stunned at what Shirley is doing with her legs. Warren doesn’t even pretend to be enjoying the show, for reasons that are more fully explained in Carly Simon’s 1972 hit song that may or may not be about him. In the background, a young John Waters is inspired to start producing movies about messed-up people doing questionable things….

Joan: “You know, I do rather admire her fortitude, standing up and tap-dancing for what she believes in. But her message is a bit mixed. She’s cautioning us about careless carnality whilst her pelvis is doing things that mine has never done, and I can assure you that I’ve done everything I possibly could with my junction box. And that’s just been since brunch.”

Warren: “Aw, who care’s what she’s doing. She’s just trying to get attention.”

Joan: “Darling, isn’t that what we’re all doing? If we didn’t want attention, we’d stay at home and knit afghans and write terrible poetry and name our cats after characters in books. Does Heathcliff want some fresh tuna?”

Warren: “Actually, I do, but Carly will sing about that later. You don’t understand what it was like growing up with Shirl the Whirl. She was always hogging the spotlight.”

Just then, Kim Kardashian waltzed in the door of the Lido. “I’m here! Start loving me! Wait, all of these people are old and I don’t recognize any of their names from Twitter.”

The bouncer promptly threw her back out said door, because this was Paris and nobody had time for all that American mess. Kim landed on Kanye West and they tumbled into the street, pausing in mid-roll to snap a selfie and post it to Instagram, adding the hashtags #CityofLits, #SpainRocks and #UncontrolledNarcissism. After slamming up against a statue of Serge Gainsbourg and adjusting their tiaras, Kim broke it down for Kanye: “You don’t want to go in there. There are too many people who weren’t raised on social media.”

Meanwhile, back in the Lido, Shirley has just finished her performance by ripping off her gender non-specific trousers and flawlessly executing a triple back-handspring, during which she released a dozen ping-pong balls from her cooter-shooter, each of them inscribed with quotes from the “Kama Sutra”. The crowd leapt to its feet in applause, because the French greatly appreciate absurdity combined with energetic nudity.

Joan: “I did not see that coming.”

Warren: “Imagine how the ping-pong balls felt about the situation. That’s an entirely different take on the Trojan Horse concept.”

Joan: “But you have to admire her originality, even if I don’t admire the lack of pruning with her privet hedge. I don’t think a gardener has tended to that mess since 1955, when she was in that Hitchcock movie where the closet door kept opening for no apparent reason. Wait, I think I just got the symbolism. She’s rather brilliant, I must say.

Warren: “Oh, please. She’s just showing off, just like all those Christmases where she insisted on opening the first present. It’s not all about her. I can shoot ping-pong balls, too.”

Joan: “Hang on to that last thought for now, as we might need to explore a bit later. I love the smell of exhibitionism in the morning. Next thought, I think you’re jealous.”

Warren: “Me? Of her? That’s so meaningless.”

Joan: “Like the 700 hundred women you will eventually sleep with that will motivate Carly Simon to pick up a guitar and compose a song about vanity and cloudy coffee?”

Warren: “Okay, fine. I am jealous. Shirley always trumps me. She’s better at acting. She’s better at choosing the right scripts. And she can shoot twelve ping-pong balls when I can only shoot two.”

Joan: “I hear your and I see you. All actors lives matter. But at least you’re pretty, and that goes much further in Hollywood than actual talent. How about we head back to my place and see if we can up your projectile output from two to three, hmm?”

Joan: “Of course, Darling. Lust means never having to say you’re sorry about the accommodations.”

Joan: “But promise me one thing.”

Joan: “Will you post every single thing we do on Instagram, even if much of it is meaningless and worthless?”

Warren: “Done deal. Isn’t that what Americans do?”

Previously published. Modified and considerably extended for this post.