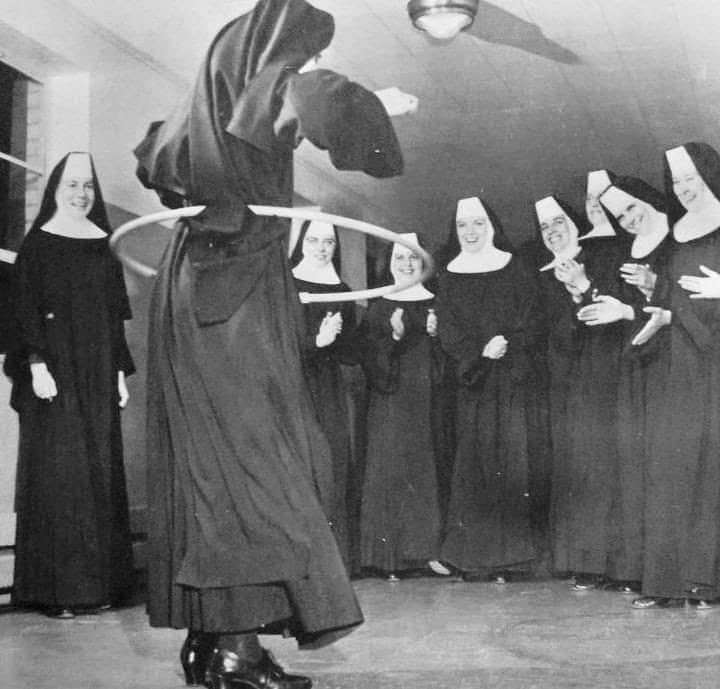 Later that night, the sisters at Saint Expulsia’s Convent of Cloistered Celibates were unable to sleep, probably because someone had put just a little too much sugar in the tapioca pudding served at the Chastity Dinner earlier that night. Bored and vibrating, they gathered in Sister Socialita’s spartan chamber to play one of their favorite games, “Guess the Pagan Activity”. Once they were all assembled and had formed a giant circle per the rules (rules are very important when one is cloistered), Sister Exhibita walked to the center of the gathering to initiate the first round.

She held up a large round of plastic tubing.

The crowd bristled with excitement. What could it be? What was she going to do with it? Have people died doing whatever it was?

Sister Sadistica reached over and firmly slapped Sister Extemporania. “Girl, pull yourself together. We aren’t allowed to guess until Sister Regulationetta hits the buzzer and officially triggers the Answering Festival.”

Sister Extemporania pouted briefly, not pleased with the slappage, but then she realized that she was feeling an odd tingle somewhere other than her face. She moved a little bit closer to Sister Sadistica, although she didn’t know why she felt compelled to do so. She made a mental note to think about this later when she prepared for bed, removing 43 of her 46 undergarments and stretching out on her thin-mattress cot.

Meanwhile, back at the ranch in the middle of the Cloistered Circle, Sister Exhibita lowered the round pagan tube over her body until it aligned with her waist, then she gave said implement an eye-opening, clearly-practiced flick of the wrist, causing the tube to whirl around her midsection. Then, horror of sacrilege horrors, Sister Exhibita began to gyrate her previously-chaste hips in a manner that kept the whirling tubing afloat, a clear sign that either the Lord had anointed her with magical talents or the devil himself was blowing hot air up from Hades.

Three of the sisters immediately fled the Apocalyptic Arena, convinced that Armageddon had just been triggered by a gyrating pelvis. (Two of them managed to climb the walls of the convent and swim to Bavaria, mainly because they weren’t thinking clearly and had no sense of direction. The third never made it past the kitchen, where she spied an untouched bowl of tapioca pudding and could not ignore the siren call of sugar addiction.)

The majority of the sisters stayed right where they were, because nothing this interesting had happened since 1929 when Sister Nolongerwithus had brazenly danced the Charleston and the Stock Market crashed the next day.

Sister Rumorosa: “Do you think this is how Lucifer recruits his minions?”

Sister Inbredia: “I don’t know about that. But I do know my Momma used to swivel the same way, usually after she’d sucked down a vat of corn liquor and she was needing a new husband to pay the bills.”

Sister Rumorosa: “How terrible for you.”

Sister Inbredia: “It wasn’t so bad. She taught me some really good dance moves. I actually made it to the semi-finals on Star Search with my flaming-baton act before I fell off the stage and set one of the judges on fire. It didn’t go so well after that. So, my publicist sent me here to get some sympathy with my social media followers.”

Sister Rumorosa: “I don’t even know what to say to that.”

Sister Inbredia: “It doesn’t matter. The narrator is about to yank us in another direction because he didn’t really plot this story very well and he’s just winging it.”

Suddenly, the door to Sister Socialita’s room flew open and Sister Mother Hubbard (shout out to recent post comments!) marched into the room, immediately assessed the situation with a jaded eye, and proceeded directly to condemnation. “First, this gathering is not sanctioned by Jesus. Second, four of you have not paid your HOA fees this month. Third, someone in this room is horny. I could sense it all the way from the Serenity Garden where Humberto, the wickedly handsome groundskeeper, and I, were… trimming the petunias. Let’s leave it at that. I demand to know who is lustfully hormonal. This country can’t survive another Stock Market crash.”

Sister Realistica: “Perhaps you should ask the whirling dervish in the middle of the room. Hard to miss that action.”

All eyes fell on Sister Exhibita.

Sister Mother Hubbard: “Could you maybe stop gyrating? That would help tremendously.”

Sister Exhibita: “Actually, I can’t. I’ve never known such freedom in my entire life. This motion just speaks to me. I don’t know why.”

Sister Mother Hubbard: “You poor thing. This situation requires intense therapy. Sisters, please clear the room so I can lay hands of healing on Sister Exhibita.”

Sister Whinetta: “But that’s not fair. We don’t get any of the premium channels on the crappy internet service in this crappy convent. We need something to keep us entertained.”

Sister Mother Hubbard: “Go! All of you. Run with the wind and never look back, lest ye be turned to pillars of salt who can’t eat that delicious but hallucinogenic tapioca pudding.”

The room emptied out, slowly and begrudgingly. (Sister Punketta spray-painted “Nun Lives Matter!” on an ancient tapestry woven by Mary Magdalena the Younger.)

Sister Exhibita: “But should I still jump to the left?”

Sister Mother Hubbard: “Don’t try to confuse me with midnight movie references. What you should do is go visit Humberto in the Serenity Garden. Tell him you need your petunias aligned.”

The hula hoop dropped to the floor and was never spoken of again.

The next day, the Stock Market dipped briefly but then rebounded and reached a previously unknown level of satisfaction.

Note: Photo provided by Partner, who fully understands that I am twisted beyond redemption.