Disclaimer: The opening photo is not the selection for this week’s writing prompt. It’s just a random, placeholder snap meant to get your attention so I get can drag you further into the questionable Bonnywood web. (Although it should be mentioned that the placeholder does have a tenuous connection to the plot of this bit.) The real photo comes later, after I share the background story which will make the image a bit more enjoyable, at least in my unregulated mind.

The Background Story, Sharing Of:

Earlier this year, before the Pandemic jacked it up for everybody, Partner and I were about to embark on another one of our “Let’s go have lunch in Abilene!” larks. Said larks involve us driving three hours to said Abilene, where we meet up with Sister of Partner, who is driving three hours from Odessa. We have a leisurely lunch, catch up on this and that, and then we flee in opposite directions. This seems like a lot of work for not much return, but it’s actually quite fun and you only live once, so screw it and do it.

Said lunch takes place at Miguel’s Tex Mex Café, a lovely and delicious eatery with a provocative menu and fascinating, creative artwork displayed hither and yon. The placeholder photo is of a painting in the men’s bathroom. It spoke to me whilst I was speaking to the urinal, so to speak, and I whipped out my phone to record this happenstance duality of the Circle of Life. I only captured part of the painting, as I often find the parts of things to be much more interesting than the whole.

Back to the Background, Sharing Of:

As the trek to Abilene is decidedly time-consuming, especially since lunch is the only thing on the agenda, Partner and I had to rise early so we could shake off the slumber and get our asses on the road. In a snit of whimsy, we had invited our bestie Tiffany to join us on the expedition. (She’s accompanied us on the Abilene Run before and has proven to be an admirable companion, winning several awards.) To make things easier, it was arranged that she would join us the previous evening and spend the night.

This decision almost derailed The Plan. As has been established in the Bonnywood Folklore Archives, all three of us have a penchant for adult beverages. Naturally, said beverages were consumed on said previous evening, with great gusto, and before long we were alternately bellowing Elton John songs and sharing tear-stained episodes from our tumultuous pasts. (You know how it goes.) When we finally tumbled into our respective beds, the Departure Time for yonder morn was a bit in question.

Surprisingly, derailments did not occur. Actually, all three of us leapt out of bed with nary a punching of the snooze button. In a Power Twins moment, Tiffany and I were both buzzing with boundless energy. We managed to shower, dress and pack our essentials for the road trip in roughly 37 seconds, leaving us plenty of discretionary time before The Departure. (Partner was just a tad slower out of the gate, so it was going to be a minute before he was ready.) With plenty of time to kill, I asked Tiffany if we should run to a nearby Starbucks that had just opened.

She squealed. Tiffany worships this chain, and the company worships her, as she is singly responsible for 17% of their annual revenue. I hollered at Partner that we would be right back (he was still in the shower, because he really likes to be clean) and then the Power Twins rushed off on the impromptu Mini Adventure before the Maxi Adventure

It should be noted that it was still dark when we left Bonnywood, so we were unable to fully assess our surroundings. Not that we cared, singly-focused as we were, just setting the scene. Two minutes later, we squealed into the parking lot of Starbucks and clattered inside, wherein Tiffany immediately succumbed to euphoria. (Perhaps I should point out that this location is also a training facility, so it’s huge, and they are always testing out new products and new snacky treats and everyone is super nice because they yearn to become permanent employees.) Tiffany was in the Valhalla of Caffeine.

Still, we had to get back to Bonnywood, as the hot water would eventually run out on Partner. So, I allowed Tiffany to have a respectable amount of Prostration Time Before the Altar, and then I yanked her ass out of there.

We squealed into the much-smaller parking lot of Bonnywood.

We tumbled out of my RAV4, eyeballs buzzing from the unnecessary caffeine, and we stumbled toward the Manor. It should be noted that there was much more daylight than when we had originally departed said Manor, although it was still slightly murky.

Halfway to our portal destination, said buzzing eyeballs spied this, sprawled out on the driveway: 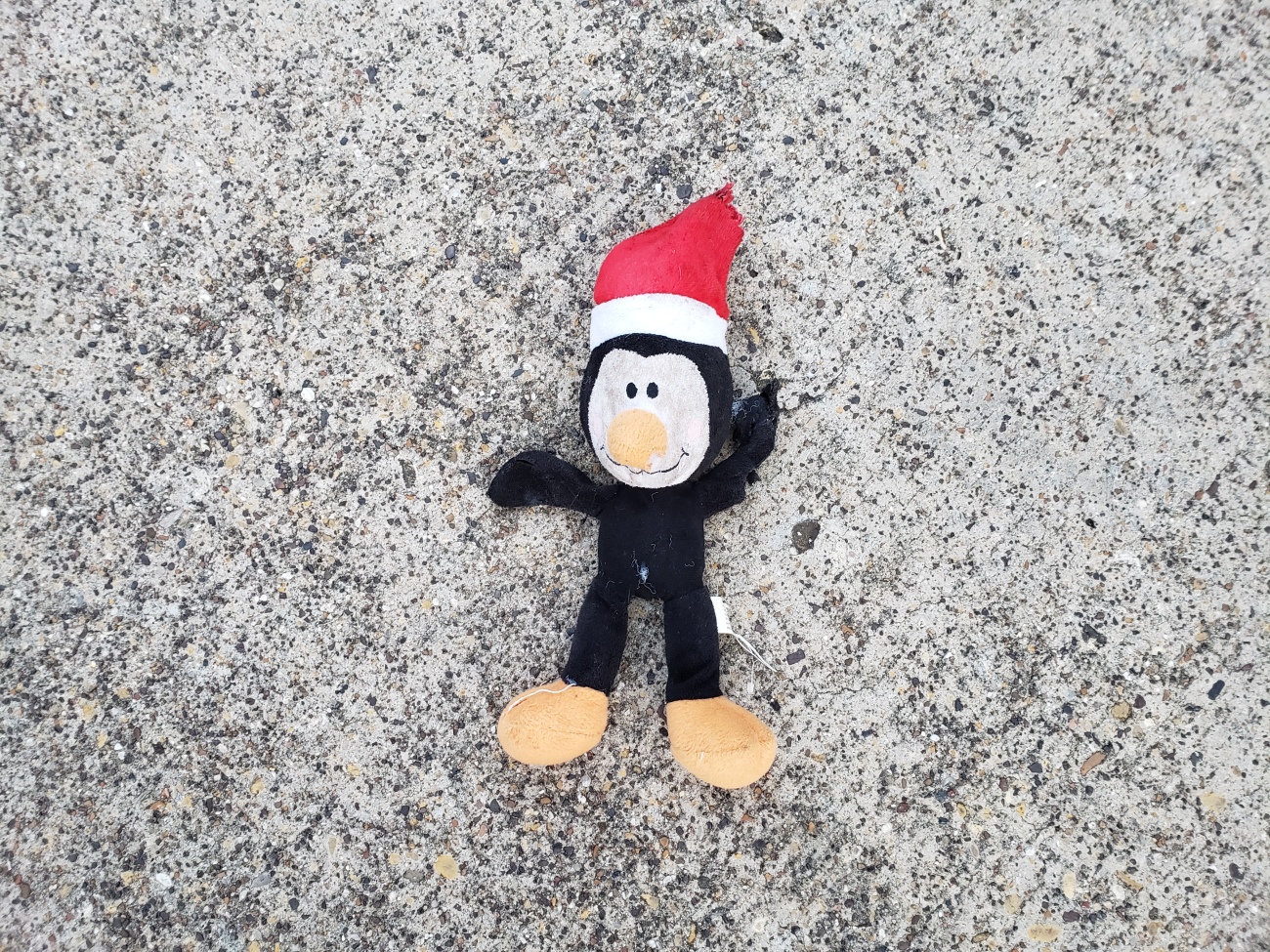 I was a bit perplexed, at that moment. And I’m still wondering, because nobody ever fessed up about anything.

Therefore, dear reader, your mission with this week’s writing prompt is to explain who or what left this gift or warning on one of the Art Deco parking lots at Bonnywood Manor.

I’m sure at least one of you knows the answer, because people talk. And drink.