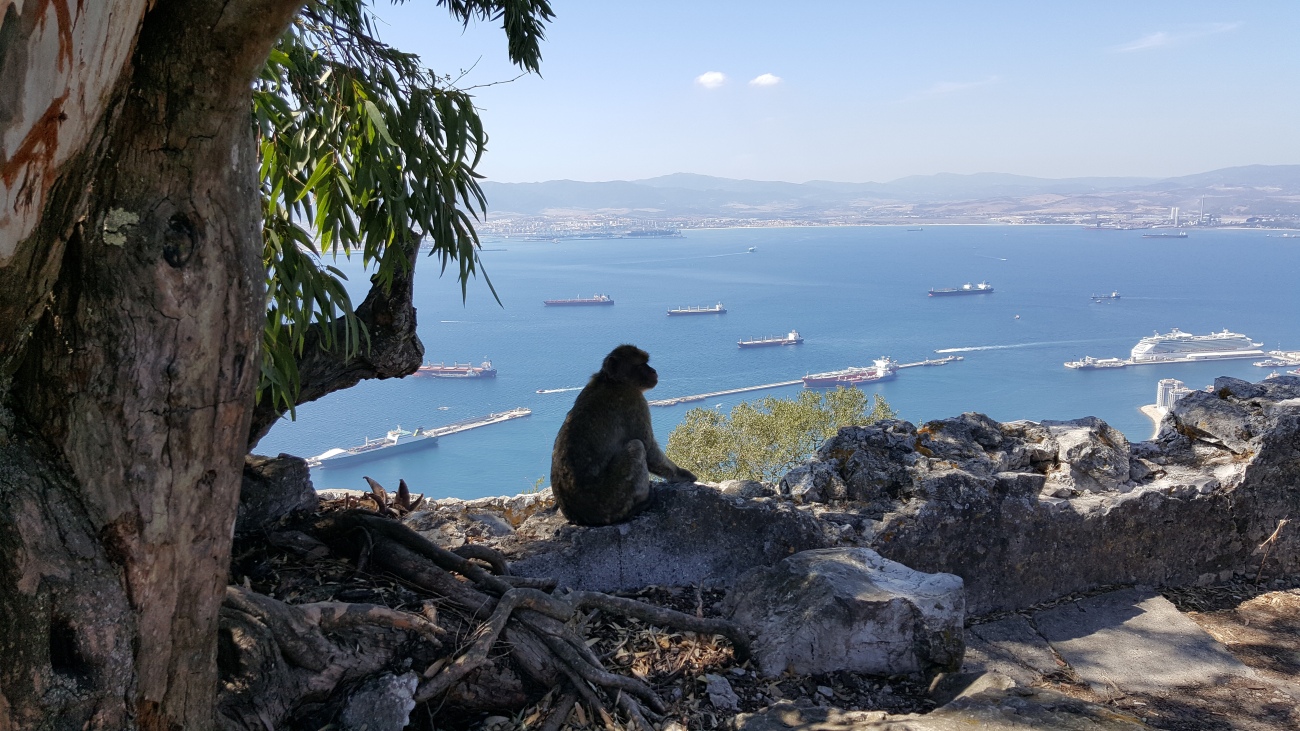 There are monkeys on top of the Rock of Gibraltar.

Did you know this?

Well, that’s not entirely fair to say. One of our travelling companions, a lovely lass that I’ll call “Twyla” for now, because I haven’t mentioned to her that I might ensnare her in one of my stories, and I don’t relish any vindictive recourse she might take for me doing so. Twyla, at one point in her vibrant journey through life, did something with the British military, and that something involved a brief stint in Gibraltar wherein she ascended The Rock and knew quite well what could be found there.

Yes, Twyla knew about the monkeys. And to her credit, she tried to let us know about the monkeys as well. In the week leading up to our day-journey to Gibraltar, she mentioned them several times, but I will freely admit that things didn’t quite register with me as I was more concerned with opening enough beer that I could re-tile the lanai with bottle caps. (I was on vacation and not particularly invested in strengthening my knowledge base. Sue me.)

I’m sure the monkeys were also mentioned at some point in one of my mandatory geography classes during my servitude in the American public school system, hundreds of years ago when I attended such. (We rode to school in a covered wagon, wearing outfits made out of corn husks and hope.) I probably don’t specifically remember the monkey issue due to the lackluster presentation skills of the teacher. He probably said “There are monkeys on The Rock and they roam freely”. This is a mundane statement of fact, one that will not entice a 12-year-old boy to retain this information. What the teacher should have said? “There are monkeys on The Rock and they can kill you.”

That I would have remembered. Luckily, the monkeys didn’t try to kill all of us when we rode the cable car up the side of The Rock, and then we were released into the wild. They only tried to kill one of us, and her fake name is “Midge”, a moniker that may not amuse her but pleases me immensely. Midge is the wife of Twyla, and as such she should have known much more about the monkeys than I did, since they share the same bed and all. (Sample pillow talk conversation – Twyla: “Whatever you do, don’t encourage the monkeys.” Midge: “Got it. Should we watch Mock the Week now?”)

We had been on top of The Rock for less than fifteen minutes when the incident occurred.

I wasn’t actually there when things transpired. I had wandered off into a lesser-travelled area, mainly because it had the appearance of a lesser-travelled area and that’s where I like to go. I’m not a fan of large tourist crowds, especially when I have to wait for members of said crowd to go away so I can get closer to whatever the hell they were being pushy about seeing. I prefer the quiet streets with hidden treasures, leisurely explorations and a complete lack of people taking selfies wherein they are the predominant feature in the photo and not the important architectural monument behind them.

So I’m clattering around in the remnants of what appears to be a concrete bunker (was there some type of war here?), entranced by the history but annoyed by all the litter left behind by disrespectful tourists, when I get a sixth-sense foreboding that I’d best rejoin my companions. I wander my way back to the group to find that Midge is a bit wide-eyed and everyone else is a definitely unsettled.

Well, apparently Midge had simply been standing there looking pretty, with the Mediterranean sun highlighting her in a thoughtful manner, when one of the playful monkeys decided that she would be the perfect apparatus for a bit of festive climbing. Said monkey did so, quickly ensconcing himself on Midge’s left shoulder.  Everyone in attendance during the ascension found this to be a perfect photo op, and pictures were taken. Said photos, later reviewed, provide a detailed visual narrative, with the story progressing from Midge and the Monkey being best buddies to the point where Monkey decides that his life goal is to start ripping out handfuls of Midge’s golden locks.

The screams were apparently heard across the sea in Morocco. The citizens of Morocco paused briefly, acknowledging the misery of human existence, and then they went back to not caring and searching for a nice leg of lamb for the evening meal.

I didn’t hear the screams at all, despite being a mere hundred feet away in a concrete bunker that may or may not have been used by Winston Churchill during some irksome negotiations during World War II, because I have focus issues. But now that I was privy to the violation, I tried to express my sympathy. This mainly involved being glad that it wasn’t me who had undergone an impromptu coiffure rearrangement, making a mental note that I better stay the hell away from the monkeys, and considering patting in a consolatory manner on Midge’s shoulder, but then refraining when I realized that she might hurl my ass into the sea in some type of PTSD reaction.

In any case, Midge recovered quite nicely, despite now needing sunscreen on her head, and we continued to gambol about on top of The Rock. This went on for some time (that rock is BIG, people) as we meandered from here to there. Eventually, I rounded a corner and found the monkey in the photo above. He was just sitting there, paying no attention to the people around him and doing his own thing. (We bonded immediately, as I do the same.) But as he reflected on the haphazardness of what has become of The Rock, I couldn’t help but have my own contemplations.

His kind has been here for far longer than any of the intrusive tourists have been alive.

The metallic beasts now trolling the sea were not there when his ancestors sat in this same position.

Sometimes Man, in his haste to subjugate, forgets to respect the value of all things.

So says me as I wait for the cable car to take me back down the mountain, choosing ease over effort.

Previous Note: Originally published in “Bonnywood Manor” on 10/08/16. No changes made, as we’ve had waves of severe thunderstorms rolling through all day and evening, and I’ve been more focused on that rather than coming up with something freshly clever. (There was a thunderclap ten minutes ago of such an explosive nature that we won’t see Cleo the Cat for at least a week, which is roughly the same amount of time it will take for my man-bobs to re-descend. It was LOUD, people. I haven’t blinked since it happened.)

New Note: In the comments of that previous post, I had a brief chat with “Midge”. The exchange was nothing profound, but I think it perfectly encapsulates our whimsical but greatly-relished relationship.

“Midge”: I can almost feel my scalp burning as I read this! Love! ‘Midge’ BTW – ‘Twyla’ sends her love.

It moves me greatly that you were greatly moved.