Man with Stupid Hat: “Look, you need to give me the information or I will be forced to do unsavory things with this bullwhip.” Pola: “I have already told you that I will never reveal the secrets that I’m pretending that I don’t have. I am prepared to […]

1. “Bull Durham” I love Susan Sarandon. (And she eventually got a real-life husband out of it, Mr. Tim Robbins. Yay!) But I’m not a fan of Kevin Costner. For me, he just comes across as a smarmy jock with no charisma, no matter what role he is […]

Marlon, inner voice: “Why do I insist on bringing my wife to these staff meetings?” Elizabeth, outer voice: “Where the hell is my vodka gimlet? I ordered one an hour ago.” Marlon, outer voice: “Honey, let’s hold off a bit. I don’t know who you ordered from, but […]

Dragging another bit of Halloween mess out of the archives…   1. If you have stupidly stored an important item in a basement where the light flickers, you just need to forget about it and buy a new one. 2. If the hotel clerk hands you the registration […]

Past Imperfect – #176 (A Random and Unrequited Crusty Pie Marathon)

In my previous post, I repurposed some older Crusty Pie/Past Imperfect photos. There was some mildly heated debate on the veracity of said photos. In a bit of pique (translation: I really didn’t have anything prepped for my next post) I decided to yank the original Crusty Pie […]

Friday Night Clam Bake – #19: The Days of Whine and Poses

For this week’s Bake, we’ll be sticking with the trivia angle, although I’m switching from music to acting. (Before you run screaming from the room, sit your ass back down. I’ll be offering clues this time, so it should not be as traumatic. And here, take some of […]

Evelyn: “What on earth are you doing in my apartment? And why are you holding my diaphragm case?” Inspector: “Is that what this is? I thought maybe you were collecting those little Jewish hats. But since we’re on the subject, why is this case encrusted with rhinestones?” Evelyn: […] 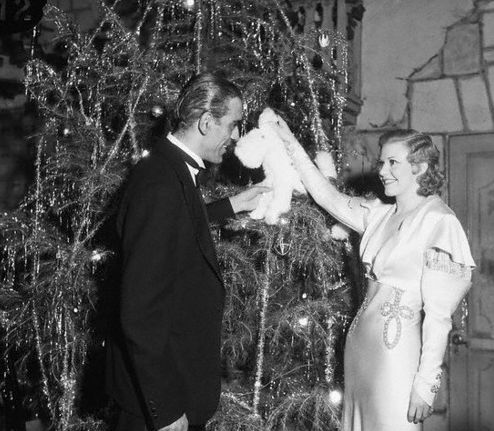 Boris: “Don’t you think it’s time we took the Christmas tree down?” Ginger: “Oh, heavens no! Can’t you see that Fluffy really likes living in it? Where will he sleep without the tree?” Boris: “Fluffy is a piñata that we got in Guadalajara when we were watching all […]

Humphrey Bogart: “I told you to stop arguing with me. Don’t you understand that I have a gun pointed at you?” Bette Davis: “But that’s what I’m talking about. I can’t take that gun seriously. Did you steal it from one of the munchkins in The Wizard of […]

1. If you have stupidly stored an important item in a basement where the light flickers, you just need to forget about it and buy a new one. 2. If the hotel clerk hands you the registration book for you to sign, and the page is dusty and […]